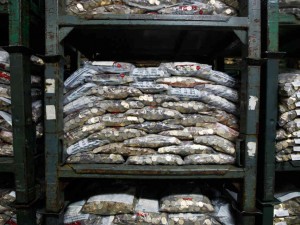 The hoard of dollar coins in the Baltimore Coin Storage

This was an interesting week. Aside from trying to understand the impact of the new tax bill (H.R. 1) on the numismatic industry, I was hired by a widow to help liquidate an accumulation of coins her late husband collected.

I took the job thinking that it could not be that difficult. She said that her late husband was a lifelong collector and had an affinity for half-dollars. It did not sound like a daunting task, so I agreed to meet with her and look at his collection.

Nowadays, when someone calls me for assistance, I usually ask that they take a few pictures with their smartphone and email them so that I can be prepared. In this case that was not possible since my new client did not own a smartphone and expressed displeasure with her “old-fashioned” flip-phone. I was taking a chance.

Rose (not her real name) reminded me of the grandmother-next-door type. Her house was well manicured and the entry reminded me more of the 1950s than any other time. She was neatly dressed as if she was meeting someone of stature. Thankfully, I thought to wear something nicer than my normal jeans and a polo shirt.

We spoke and then she brought me to her late husband’s office. It was quite a contrast from the rest of the house. This was clearly a man’s room whose interest were cars, horses, and coins. Rose said he owned three cars including a 1972 Oldsmobile 4-4-2 (muscle car fans will understand the significance of this car) and had invested in a few racehorses. The cars and the shares in the racehorses were sold but nobody could help her with the coins. Then I found out why.

I was expecting albums, folders, and rolls. When she opened the cabinet, there were five shelves with old cigar boxes, coffee cans, and other containers with loose coins. And while I thought he was a half-dollar collector, he had coins of all types including foreign coins. There were a lot of half-dollars, mostly Walking Liberty halves from the later years and Franklin halves. There was an old metal 35mm film canister with 1964 Kennedy half dollars.

There were several envelopes of foreign currency and Military Payment Certificates he kept from when he was an Army medic in the Korean War.

I have been working with a dealer who specializes in purchasing bulk estates. To help her get the best price, I have been doing a lot of sorting, searching, and ordering of the coins in a manner that would take some of the burdens away from the dealer so he could pay more.

As a bonus, some of the vessels used for storage are also collectibles. The old wooden cigar boxes from Cuba that can be traced to a time before the rise of the Castro regime are highly collectible. So are a few of the coffee cans from brands that have not been heard from in over 50 years including regional brands I had never seen before. That does not include the metal 35mm film canisters. When I asked a dealer, who specializes in old photographic equipment, she made an offer that Rose will probably not refuse.

Considering the size of the accumulation, it will take at least two more days to finish, pack everything, and ship it to the dealer. Although this work is preventing me from writing, I am having a good time. Rose is a nice person and a diehard University of Virginia Cavaliers fan since that was her late husband’s alma mater. Since she decided she likes me, Rose is going to cheer for my Georgia Bulldogs in the upcoming Rose Bowl—which is why I am calling her Rose!

PARIS — Over his 40-year career, the fashion designer Jean Paul Gaultier has had his share of odd requests but until last year, he had never been asked to dress a coin. His imagination has produced outrageous concepts like fitting Madonna into a pointy conical bra, slipping the bearded transgender Eurovision winner Conchita Wurst into a couture dress and sending models down a runway lined with menorahs for his fall 1993 Chic Rabbis collection.

The staff at Unity's Lincoln Highway Experience have know for some time that future U.S. President William Henry Harrison visited their museum in the mid-1800s, …

Washington – At the U.S. Mint in Philadelphia, U.S. Sen. Roy Blunt participated in the ceremonial strike of the 2018 World War I Centennial Silver Dollar honoring the 100th anniversary

Evidence of Jewish-Muslim influences in early days of Islam may prove interfaith dialogue.

This is something, which has been overlooked, the court said.

Sales of U.S. Mint American Eagle gold and silver coins fell sharply year-over-year in November, keeping their tally for the first 11 months of 2017 on track for the weakest year since 2007, the latest data showed on Thursday.

Nearly 150 coin denominations and fables containing 17 years of the 11th-12th centuries have been found in the country’s southern region Lankaran recently.

The Widow’s Mites &ndash; In Chapter 12 of the Gospel of Mark is a story, a parable, about giving. In summary, the story goes that Jesus and His Disciples were