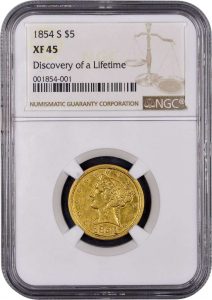 “Find of the Century,” a rare 1854-S $5 Half Eagle authenticated and graded by NGC

The story of the week is the discovery of a rare 1854-S Half Eagle ($5 gold coin) that everyone thought was fake but turns out to be real.

The coin was discovered by a New England man who wishes to remain anonymous, asked several dealers about the coin before sending it to Numismatic Guarantee Corporation for authentication. NGC investigated the coin, found it to be authentic with a grade of XF-45

It is one of only four coins known to exist. One is in the Smithsonian, another is in the Pogue collection, and there is one that was stolen in 1967 that has never been found.

All of the stories covering this find have been about the coin and little is known of the current owner. Borris Tavrovsky, a co-owner of Oxbridge Coins in San Francisco, said that the coin could be worth $3-4 million based on the sale of other coins from the Gold Rush-era. Of course, if it goes to auction and if you have two people who desperately want the coin, it could sell for more.

“I think he’s going to be quite rich,” Tavrovsky was quoted as saying. “I can see why he wants to remain a mystery man. Some people who win the lottery don’t want to reveal their identity for fear those cousins start badgering you.”

What would you do if you found a rare coin?

'Fake' Gold Rush coin declared real: 'It's like finding an original Picasso at a garage sale'

It's only one of four known to exist — and one of those went missing after it was stolen by masked gun-wielding robbers in 1967. A small gold coin originally thought to be a fake was authenticated in April by experts as an 1854 California Gold Rush coin, one of 268 struck at the San Francisco Mint that year.

Opinion: rare and valuable coins are expensive for a reason

What: Historic Coins and Medals, Featuring Morgan Silver Dollars from the Collection of Ralph and Lois Stone Where: Sotheby&#039;s, 1334 York Ave, New York, NY 10021, USA When: 21 May

Coin Jewelry Is Taking Over, so You Might as Well Embrace It

BRITONS can keep spending their pennies for years to come.