The delay in reporting the weekly world numismatic news was because I worked at my first Comic Convention or Comic-Con. It was a small Comic-Con with between 60 and 80 vendors around a large hotel ballroom. Of course, each table had comics but others had different items related to the comics, science fiction, horror, pulp fiction, and similar works.

As with any of the shows that I have worked, there were the serious collectors with want lists who were laser-focused on finding that gem for their collection. There were the collectors and those with a general interest who were there for the experience. They were looking at different items for something unusual. Finally, there were those who were there for the cosplay. Cosplay is a portmanteau (combination) of the words costume play.

Aside from a visit by the likes of Darth Vader, Wonder Woman, and the Joker in the crowd, the best costume was the guy dressed as Iron Man. Ironically, the solid pieces of his costume were made from wood. It looked good but the wood seems odd given the character.

What does my experience at the Comic-Con have to do with numismatics? It is a type of show that demonstrates how other hobbies adapt with their audience to lure new collectors. Rather than concentrating on making sure that every collector has the latest special edition of the No. 1 copy of the current story with their favorite character, it promotes fun, interaction, and does not judge each other because someone does not collect the four special covers of the No. 1 copy just issued by the comic book designer. 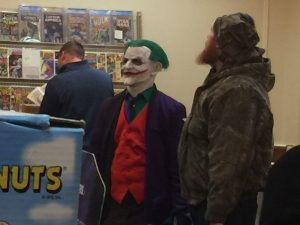 There’s always a Joker in every crowd! 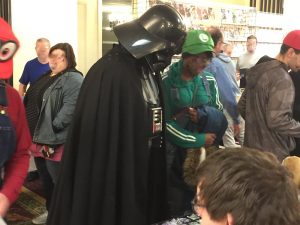 A visit by Lord Vader himself!

Numismatics claims to be all inclusive but if you ask most dealers what to collect, they will gravitate to most of the same answers. If they are not pushing gold the number of Morgan dollars in their cases is an indication of their preference.

There are too many people with set ideas of what makes a good collection. And the problem is that the dealers are the wrong people to ask. They have an agenda over the perpetuation of the hobby. There is nothing wrong with that agenda because it contributes to their livelihood and the well being of their employees. Unfortunately, too many dealers pay lip service to the notion of collect what you like while pushing the latest set of VAMs on you.

While thinking about the show as I was driving away with half-empty bins of inventory was that if the hobby was more inclusive to people who do not collect high-end merchandise. People have different tastes and there should be more dealers who not only cater to those tastes but should be given better access.

Speaking of the dealers, if they want to be more inclusive and show consideration for the collectors they should stay until the close of a show on Sunday. When I participate in the many antique shows, flea markets, toy shows, sports shows, and now this Comic-Con, dealers are warned that if they pack up and leave early they may not be allowed to set up at a future show. Numismatic shows say this, including those sponsored by the ANA, but nobody follows through. Then we get a situation like in Baltimore where it is not worth attending on Sunday, my only day off this week.

Finally, something should be done to make the shows fun. While I am not suggesting that people get dressed up like at the Comic-Con, there has to be something to make it fun. For example, the last time I attend the F.U.N. show, there were tables set up where Hobo Nickel artists were carving coins and making jewelry on the show floor. That was fun!

Although there are dealers who give out low-value coins to young collectors, can we do something to make the show more fun for the casual collector? Does everything have to be about buying the next piece of stickered plastic that happens to have a coin inside?

There have been some successful promotions including a chance to win an autographed Red Book but what about a drawing for a gift certificate? Hire a magician to do some coin magic to intrigue people. What about a walking exhibit where an expert in a non-mainstream area walks around and starts with, “Hey, let me tell you a story…” which involves taking a coin and talking about it beyond its grade. I am sure that someone can take a handful of tokens representing the area of the country where the show is and tie it with local history.

Numismatics is not dying, but it is not adapting. Maybe if the shows can be made into a real event then more people would be willing to collect. Remember, the Comic-Con had aisles full of people on a Sunday, more than will attend the Whitman Show in Baltimore next week!

The view standing In the middle of Hall A at the Baltimore Convention Center for the March 25, 2018 Whitman Expo.
Is this the fate of numismatics?

A TEAM of metal detectorists in a field near Malvern had a 'lottery winning' moment as they found a hoard of rare 17th Century coins.

Coins were buried in a ceramic pot under the floor of a building, Warwickshire County Council said.

The 14th Century coin was discovered inside one of three hidden drawers in a wooden bureau.

The 14th Century coin was discovered inside one of three hidden drawers in a wooden bureau.