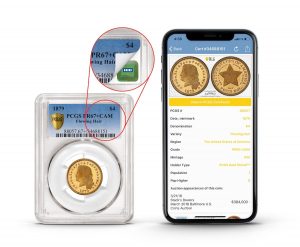 PCGS plans to place an NFC chip under their labels. (PCGS Image)

The year is ending with the news that Coin World and PCGS are trying to leverage technology to allegedly combat counterfeiting and provide a value add to the hobby.

Coin World wants to join the sticker craze and add one to your NGC or PCGS slabbed coin. PCGS is offering a similar technology under the label.

Both services will use something called Near Field Communication (NFC). NFC is a technology based on low-frequency communications where a transmitter emits a signal when activated by a reader.

Although NFC is not a new technology, it had gained interest when Apple announced that the latest iPhones had programmable NFC hardware. The NFC capabilities built into prior versions of the iPhone were not accessible outside of Apple’s applications running on the phone.

You may have used NFC without your knowledge. All contactless payments like Apple Pay, Google Pay, and the tap-to-pay credit cards require NFC. Many department stores are using they call smart tags, which are tags with an NFC chip embedded in them. Aside from electronic payment, contactless keycards, sometimes called proximity cards, are used to access restricted areas are NFC-based technologies. 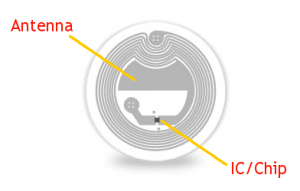 One Example of an NFC Tag

Now Coin World and PCGS want to bring it to numismatics.

Like every technology, NFC is not perfect. Its most significant risks come from the use of NFC tags. These low-power devices have limitations that have allowed hackers to defeat whatever features they are supposed to protect.

The security concerns do not consider privacy issues. Do you trust PCGS or Coin World with the data they claim to be keeping? Do you trust that this data will not be for sale under any circumstances? Do you trust that there are sufficient protections in place to prevent others from hacking the NFC antenna that will allow you to be tracked?

In my past life in information security, I had the opportunity to test the security of these wireless communications. As part of the test, I was able to walk out into the parking lot and open car doors without access to the keys. Unfortunately, the principles I used in that demonstration are the same that others have used to hack NFC.

As we head into 2020, I plan to discuss the impact of NFC from the perspective of someone who used to look at this stuff for a living and had to explain it to non-technical people.

Hey, can you spare a nickel? A tale from the world of coin collecting

Most years, at least, a nickel produced that same year would show up in pocket change somewhere between late winter and mid-summer.Not in 2019. I even purchased two rolls of nickels from a bank in …

TAIPEI (Taiwan News) — Tainan City police have arrested a woman suspected of smuggling in fake Taiwanese currency from China with the intention of disturbing the economic system on the island. According to Liberty Times, the police received a report from an owner of a claw machine who claimed that someone had been inserting fake NT$50 coins into the drop-and-grab machine.

The recent introduction of GHC 100 and GHC 200 new currency denominations has left many thinking about the nation’s one pesewa coin, which has gone into oblivion. Background It is common knowledge that, when currencies are introduced, they are well received by the people who are keen to hold them sometimes in admiration of the mere design amidst criticism of the colours and the features used.

The United States Mint has announced that new reverse designs will be coming to the popular American Silver Eagle (ASE) and American Gold Eagle (AGE) coins in 2021, marking the end of the popular “family of eagles” reverse design by renowned sculptor Miley Tucker-Frost from the original 1986 gold coin series.

→ Read more at newsmax.com
The Coin Deal: Can I Back Out?

Following heated debates in Crown Heights over a recently minted coin, we bring you a halachic exploration of the topic from the Ami Magazine. The beis din column appears weekly in the Ami Magazine.

When a handy, capable soldier truly loves a woman, he can fashion something beautiful out of practically anything.