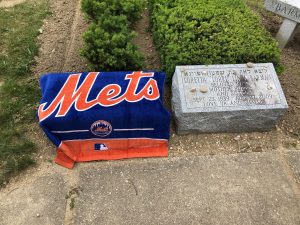 Before unveiling my father’s grave marker, it was covered with an appropriate towel. After 12 years, he is next to my mother, again.

Even though the United States may be recovering from the COVID-19 pandemic, many will feel its effects for a long time. Whether from missing events from 2020 to the loss of a family member, survivors will have reminders that will last a lifetime.

Last Friday was my father’s unveiling. For those not familiar with the custom, Jewish descendants celebrate the life of the deceased by dedicating the grave marker where the loved one is buried. The marker is covered then revealed at the end of the service.

As a die-hard and always suffering Mets fan, my father’s marker was covered with a Mets towel until the end of the service. Later that night, the family went to Citi Field to attend a Mets game in his honor. Jacob deGrom pitched a phenomenal six innings and the Mets won.

It was my first time attending a game at Citi Field. The stadium is quite different from Shea Stadium where my father and I saw many games together. In 1972, we attended more games than he expected because I kept winning tickets. That year I was delivering Newsday when it was an afternoon newspaper. To boost the number of subscribers, Newsday would give out prizes to the paperboys who sold the most subscriptions. When Newsday started a Sunday paper, there would be more opportunities to win prizes. I chose the Mets tickets whenever it was an option.

In those days, the paperboys collected directly from the subscriber. On Saturday, we would pay the distributor for the week’s newspapers and hand in orders for the next week. One week I almost did not have enough money to pay the bill because several people paid using silver coins. The silver coins went inserted into the blue folders. My father helped me make up the difference.

By the end of my three years delivering Newsday, I had a nearly complete set of Roosevelt dimes picked from pocket change and from the people who paid for newspapers. Shortly before we moved from New York, my father and I went to a local coin shop and we purchased 12 dimes to almost complete the set. A few days later, he came home from work with the one dime that the local coin shop did not have and a Whitman Deluxe album. Later, I learned he bought the coin and the album from Stack’s in Manhattan.

Although this chapter is over, the memories and the album of Roosevelt dimes remain.

“Treasure of Chianti,” now on view through Sept. 3 at the Museum of Santa Maria della Scala in Siena, Italy. A treasure trove of ancient Roman silver coins discovered by a team from Florida State University is now on display to the public for the first time in Italy.

→ Read more at news.fsu.edu
The World's Most Valuable Coin Sells at Auction for $18.9 Million