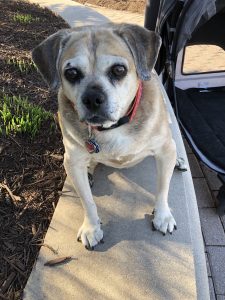 The love of a dog can never be measured. When you bring one into your home and heart, the bond is instantaneous and enduring. Bring in two, and it is a house full of barking, messes, love, and affection. My wife and I raised two puppies, a brother, and a sister, from different litters.

When the youngest has been with you for 13 years and 7 months, it may be a long time, but it feels like yesterday. We raised Tessa from a puppy from the day we picked her up in November 2008.

We used to say that if Tessa was human, she’d be a party girl. Tessa was a fun-loving dog who was very intelligent but would rather play. She did not have a short attention span, but it was short when she was not playing.

Aside from annoying her (late) brother, Boomer, Tessa’s favorite pastime was eviscerating toys. Any stuffed toy would not last more than a few moments, and she would attack, and the stuffing would be all over the house. If the toy had a squeaker, Tessa would chew it until it stopped squeaking.

Tessa slowed down a lot over the last two years, and age was catching up with her. Amongst her ailments, Tessa had arthritis in her hips. We bought a doggie stroller to bring her around the neighborhood. Since I had some time off on Monday, Tessa and I went for a long walk. The image on this post is from that walk. It was the last time we had quality time together.

On Saturday, Tessa went into respiratory failure, and we rushed her to the veterinary hospital. For a while, it seemed that she was stable and could get better, but she took a turn for the worse. We had no choice but to help her end this journey and lead her on to her next journey across the Rainbow Bridge.

I hope Tessa finds her brother Boomer, and they are running around like they did so many years ago. Sweet dreams, my baby-baby sweetheart. You will be missed.

Who wants dead presidents and royalty on their money when Star Wars and Lord of the Rings are an option?

→ Read more at gizmodo.com
Why is there a coin shortage? Quarters, nickels, dimes and pennies are in short supply again

There’s a new reason to break open your piggy bank. Pocket change is in short supply – again. While some will call it the great coin shortage of 2022, America is facing a coin circulation problem.

→ Read more at usatoday.com
The nickel in your coins is now worth more than 5 cents, but you can’t cash in

TAMPA, Fla. (WFLA) — Amid war in Ukraine and market chaos, nickels are now worth more in melted metal than their face value. But before you empty the piggy bank and fire up a smelter in the yard, there are a few things you should know.

→ Read more at nbc4i.com
Most valuable coins in circulation worth up to $13,100 including Washington

EVERYONE likely has a circulated coin somewhere around them – and it might shock you to learn that it could be valuable.  A circulated coin could mean a few things, but generally, it is a type of condition that collectors refer to.

This rare silver coin shows a portrait of Charlemagne that was made during his lifetime.