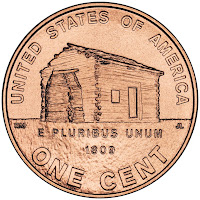 Billed as the first redesign of the Lincoln Cent in over 50 years, the first coin issued will honor his birth and early childhood in what is now known as Hodgenville, Kentucky. Lincoln was born on February 12, 1809, in a log cabin to Thomas and Nancy Hank Lincoln. While the log cabin where Lincoln lived has been lost to history, a replica of common design for the era was used as a model for the coin. The reverse was design by Artistic Infusion Program (AIP) Master Designer Richard Masters and sculpted by Sculptor-Engraver Jim Licaretz

However, it may be a while before the new coin will be seen in change. Susan Headley points out that the way coins are distributed through the Federal Reserve system, there may be a backlog of coins in stock that will prevent the new cents from reaching the public. Susan explains that the bad economy has caused more coins being returned to the Fed than being distributed. Since the Fed buys only what it needs from the US Mint, it may be a while before the inventory is depleted enough for the Fed to order coins.

Susan reported that when she visited the Philadelphia Mint last week, she found that three of the lines striking cents were not running. When I visited the Philadelphia Mint in the summer of 2007, we were told that the machines that strike cents run 24 hours a day, seven days a week. To hear that the Mint has reduced production of cents is very worrisome for the economy and those who work at the Mint. I hope their superintendent has the chutzpa that Mae Biester showed in the 1950s.