The Bureau of Engraving and Printing unveiled the new $100 Federal Reserve Note earlier today in Washington, DC. Along with the watermark, security thread, and color-shifting ink, the new note now includes enhanced micro printing, a new application for color-shifting ink, and a security ribbon that appears to animate as the note is tilted. Since the $100 note is the most circulated and most counterfeited note in the world, the BEP has been working with the U.S. Secret Service and the Federal Reserve Board to stay ahead of the counterfeiters.

“The $100 is the highest value denomination that we issue, and it circulates broadly around the world,” said Michael Lambert, Assistant Director for Cash at the Federal Reserve Board. “Therefore, we took the necessary time to develop advanced security features that are easy for the public to use in everyday transactions, but difficult for counterfeiters to replicate.”

“As with previous U.S. currency redesigns, this note incorporates the best technology available to ensure we’re staying ahead of counterfeiters,” said Secretary of the Treasury Tim Geithner. 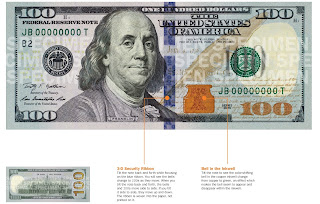 The redesigned $100 note includes a new security ribbon. The blue 3-D Security Ribbon on the front of the new $100 note contains images of bells and 100s that move and change from one to the other as you tilt the note as if it was animated. Next to the ribbon at the bottom of the front of the new note is the Bell in the Inkwell. The bell changes color from copper to green when the note is tilted, an effect that makes it seem to appear and disappear within the copper inkwell.

“The advanced security features we’ve included in the new $100 note will thwart potential counterfeiters from producing high-quality fakes that can fool consumers and merchants,” said Larry R. Felix, Director of the Treasury’s Bureau of Engraving and Printing. “Protect yourself—it only takes a few seconds to check the new $100 note and know it’s real.”

The new $100 note also displays American symbols of freedom including phrases from the Declaration of Independence and the quill the Founding Fathers used to sign this historic document. Both are located to the right of the portrait on the front of the note.

The back of the note has a new vignette of Independence Hall featuring the rear, rather than the front, of the building. Both the vignette on the back of the note and the portrait on the front have been enlarged, and the oval that previously appeared around both images has been removed. Also on the right of the reverse is a large “100” printed in gold ink. It is expected that this feature will help those with visual impairments distinguish the denomination.

Review
After the animation stopped on the front page of newmoney.gov the first thing I noticed is that Ben looks a little green. With a better use of color that does not make the note look close to the money seen in common board games, the portrait of Benjamin Franklin retains that green tint from the previous note while every other aspect of the note has changed. Since the BEP chose to use a portrait of an elderly Franklin, he looks like he could be ill.

As opposed to other notes, the there are no splashes of color that makes it look like a mistake. The design is better balanced and using the inkwell as a design element and part of the security features works well. If the BEP wanted to do better with color, it would have worked better by making the portrait of Franklin in color. That would have given the note a nice look and even seemed progressive in currency design.

The most interesting change to the note is the 3-D security ribbon. It appears that the BEP has adapted holographic technology in a manner to embed into the fibers of the note to make it more difficult to counterfeit. It will be interesting to see how this looks with the note in hand since it looks very interesting in the videos distributed by the BEP.

It is a better redesign than their other efforts, but I would still like to see a better use of color.

Here is the Unveiling Video and B-roll videos produced for the BEP:

All images and video complements of the United States Bureau of Engraving and Printing.