Coin News of the World

Not all coin news comes from the United States. Here are three interesting non-U.S. stories from the last few weeks:

Foggia, Italy—A truck in southern Italy carrying €2 million in one and two euro coins crashed and spilled its load on the highway. Feeling they hit the jackpot, drivers stopped and started to scoop up the coins. On the scene, it was estimated that €10,000 was taken. A later count upped that estimate to €50,000. No arrests were reported.

Driver of the truck and the two cars in the accident were not seriously injured, but they were not the focus of many of the stories. With coins strewn on the roadway and the median, the company responsible for the transport of the coins will be spending the next few days trying to sweep up the coins that motorists did not take.

Zimbabwe—In a country where runaway inflation caused their currency to become worthless and the government made U.S. currency legal tender, Zimbabweans are washing their U.S. dollars so that they can be used.

In this poor country, low-denomination U.S notes are used until they fall apart. But in order to protect currency in crime-ridden areas, notes are carried in shoes or underwear. The obvious sanitary and malodorous issues has made it a problem causing banks and many merchants to refuse to take currency that is dirty and smelly. Some people gently hand-wash their notes and some laundry services have discovered that they can wash notes in the gentle cycle then hang the notes to dry.

Apparently this works for the poor in Zimbabwe since the notes outlive the Bureau of Engraving and Printing’s estimated life span of a $1 Federal Reserve Note of 20-months. 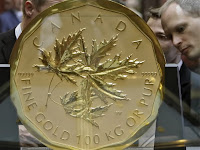 Vienna—Spanish gold dealer Oro Direct S.L.U. bought the world’s largest gold coin at auction for &euro3.27 million (approximately $4.02 million). The 100 kilogram coin with a face value of C$1 million was made by the Royal Canadian Mint in 2007. This coin currently holds the world’s record for being the largest coin ever made.

“We believe that this is a way to demonstrate our opinion that gold is the ultimate store of wealth,” Oro Direct spokesman Michael Berger was reported as saying. “As long as central banks continue to print enormous amounts of paper money, we believe physical gold will be a fantastic investment.”

The following news video is from Reuters:

About the coin in a video by the Royal Canadian Mint:

Images from Italy and Zimbabwe are courtesy of the AP.
Image of the C$1 Million Maple Leaf courtesy of Reuters.