Beware of the 2055th Ides of March 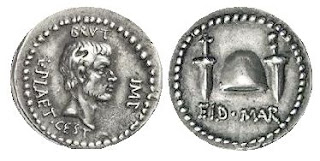 One of the most recognizable coin from ancient Rome is the Eid Mar denarius commemorative coin issued by Marcus Junius Brutus after he participated in the assassination of Julius Cæsar on the Ides of March (15th of March), 44 B.C.E. The fame of this coin was already cemented by the time Roman historian Cassius Dio wrote sometime in the second century, “Brutus stamped upon the coins which were being minted in his own likeness and a cap and two daggers, indicating by this and by the inscription that he and Cassius had liberated the fatherland.”

On the Ides of March, a group of senators conspired to assassinate Julius Cæsar to liberate the Roman Republic and save it from Cæsar’s tyranny. Brutus, who Cæsar thought was a friend and ally, was a leader of the conspirators. After Cæsar arrived at the senate, the conspirators stabbed Cæsar 23 times using daggers they hid under their robes. Cæsar died after seeing that Brutus was part of the conspiracy. William Shakespeare dramatizes this scene in Act 3, Scene 1 of the play Julius Cæsar:

Cæsar: Doth not Brutus bootless kneel?
Casca: Speak, hands, for me! [The conspirators stab Cæsar]
Cæsar: [Turning to Brutus] Et tu, Brute? Then fall, Cæsar!
[Cæsar dies]
Cinna: Liberty! Freedom! Tyranny is dead!
Run hence, proclaim, cry it about the streets.
Cassius: Some to the common pulpits, and cry out
‘Liberty, freedom, and enfranchisement!’
Brutus: People and senators, be not affrighted;
Fly not; stand stiff: ambition’s debt is paid. There are 60 known examples of the EID MAR denarius in silver and only one known gold example. The gold coin is on loan to the British Museum. The obverse of the coin features the bust of Brutus with the inscription “BRVT IMP L PLAET CEST” which means “Brutus, Imperator (honored military commander), Lucius Plætorius Cestianus.” Lucius Plætorius Cestianus was the manager of the mint workers. It was common for the coiner’s name to appear on Roman coinage as a guarantee to the quality of the metal. The reverse features two daggers on either side of a liberty cap, a symbol of freedom. Inscribed below the cap is “EID MAR,” for the Latin Eidibus Martiis or the “Ides of March” to commemorate the day he saved the republic.

Anyone in the area of the British Museum on the Ides of March, they are presenting a gallery talk by Ian Leins of the British Museum about the Ides of March. The free 45-minute gallery talk will begin at 13.15 (1:15 P.M. London Time) in Room 68. This would be a fantastic… visit one of the world’s greatest museums and take a break with an interesting talk!