What is Shepherd really up to?

I know I have not been writing a lot as of late. Those of us in the Washington, D.C. area know the problems that sequestration has caused on government agencies. It might take another month before we regain a rhythm that will allow me to plan my time better. I have a nice To-Do list of stories I want to post including four book reviews and a few iPhone apps that are interesting.

I also do not want to use this blog as a campaign vehicle because that would be boring for you to read and for me to write. But when something as big as the most recent news comes out and I am asked for a comment, I have no choice but to use this blog to answer the many email inquiries once so we can get on with life. 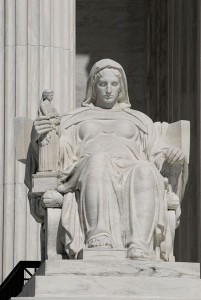 Contemplation of Justice by James Earle Fraser, outside of the U.S. Supreme Court, Washington, DC

The amended complaint is shocking and salacious. For those not familiar with the law and read that Shepherd is accusing the ANA of being a Racketeer Influenced and Corrupt Organization (RICO; 18 U.S.C. Chapter 96), it makes it look like the ANA is being compared to any number of organized crime figures you might have read about in the newspapers. Even though the RICO statutes were written to fight organized crime, using it is a common tactic by plaintiff lawyers to scare the defendants they are suing.

In order for a RICO charge to be accepted by the court, Shepherd and his lawyers will have to prove that a person as a member of an enterprise or the enterprise itself has committed to of 35 different crimes (18 U.S.C. § 1961). The crimes that Shepherd is alleging that the ANA has committed are racketeering, theft, and fraud.

Racketeering sounds like an ominous charge. Racketeering is a crime when two or more people conspire to fraudulently solve a problem. Shepherd alleges that a few employees of the ANA and members of the Board of Governors made up stories about Shepherd in order to find a way to relieve him of his duties for cause so they can invalidate his contract. The stories are salacious in nature and constitute Shepherd’s accusation of defamation that allows him to attach others to the case to show that there were more than two people involved.

The theft charge is from the guilty plea by former collections manager Wyatt Yeager. In January 2012, Yeager plead guilty to stealing items from the ANA Money Museum worth nearly $1 million. Yeager was sentenced to 27 months in a federal prison, two years of supervised probation, and ordered to pay restitution to the ANA.

With the theft charges already verified by a criminal court, Shepherd has to prove that the ANA committed fraud and at least two of the co-defendants conspired to fraudulently have him dismissed to resolve whatever issues the co-defendants perceived hurt the ANA. That would prove the case under RICO and hold the co-defendants and the ANA liable for Shepherd’s dismissal.

Shepherd’s charges against the ANA and the co-defendants are disturbing. In fact, the nature of the salacious accusations is disturbing. If there is any truth in these accusations, those involved must be disciplined. Employees involved should be required to undergo remediation to keep their jobs or be dismissed if their action crossed the legal line.

According to the ANA Code of Ethics, members are required to “To base all of my dealings on the highest plane of justice, fairness and morality, and to refrain from making false statements as to the condition of a coin or as to any other matter.” Any member found to have be part of the racketeering that Shepherd’s lawsuit alleges, should be subject to an ethics review.

I was recently reminded of a quote from Inferno, the first part of Dante Alighieri’s epic poem The Devine Comedy: “The darkest places in hell are reserved for those who maintain their neutrality in times of moral crisis.” Therefore, members of the Board of Governors who did not “report any knowledge of waste, fraud, corruption or impropriety relating to the Association to all other Board members immediately upon learning thereof” (Code of Ethics, Section 12) should also be subject to an ethics review.

Shepherd is also not absolved from his part. While he may have a legitimate case, his timing is suspect. Why did he wait until the beginning of the election to amend his complaint laced with descriptions of salacious accusations at this time? Shepherd has to remember that while he makes accusations, it takes two to tango, which means that he may have had a part in acts that the pleading describes. It is also possible that Shepherd and his attorneys picked only examples that are in his favor. Until the ANA answers the charges levied by Shepherd we are left wondering what was left out?

The bottom line is that it is time to clean house. ANA members must elect a Board of Governors that will act more like a Board of Directors. People who will be professional, open, and work for the benefit of the ANA. The Board of Governors must treat the association like the $6 million business it is and set up programs for the professional office to support the association for the benefit of the members and not the benefit of the staff. While there may be a few people with issues, as described in Shepherd’s pleading, those few people are making the situation difficult for those who are doing a wonderful job.

If I am privileged to receive enough votes to be elected to the Board of Governors, I renew the promise I made previously that the first motion I will make will be to hire an executive management firm that has a verifiable background in helping non-profit organizations to review the entire ANA management structure. This stuff has to stop so that we can get on with the business of building our collections with all of the advantages the ANA can provide us, the members.

Image from Photographs from the Supreme Court’s Collection.