Counting Down the Top 10: #1 No trouble with the curve

For the first time ever, the U.S. Mint will be producing a coin that is not flat. The curved coin is of the 2014 National Baseball Hall of Fame Commemorative Coin.

The bill required an open competition for a common obverse design “emblematic of the game of baseball.” During the government shutdown this past October, the U.S. Mint posted the announcement on their website that the winning design was submitted by Cassie McFarland of San Luis Obispo, California.

McFarland told reporters that she stumbled upon the competition while researching coins for another art project. McFarland found the U.S. Mint’s call for design two days before the deadline and submitted a drawing. Her drawing was based on an old baseball glove belonging to a relative. 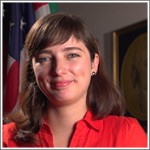 For submitting the winning design, McFarland received a $5,000 prize.

Surcharges will be $35 per gold coin, $10 per silver coin, and $5 for the clad half-dollar to be paid to the National Baseball Hall of Fame for their continuing operations. If all the coins sell out, the Hall of Fame will receive $9.5 million for ongoing operations.

Given that the selection of Coin of the Year tends to favor gimmicks (to explained in a future post), it would not be surprising that this coin wins COTY when it is considered at the end of 2015.

In the mean time, it will be interesting to see this coin in hand as this is the #1 numismatic-related story as selected by the board of the Coin Collectors Blog!