Prior to the public disclosure of secret documents, administrations have declassified documents at various levels for many different reasons that those of us who worked in these areas did not understand what was to be classified at what levels and for how long. Each department and agency had its own rule. However, everything that was classified was supposed to be declassified after 50 years.

In 2009, President Obama issued Executive Order 13526 to try to create some order out of this chaos. Aside from defining the classification levels, document marking requirements, it also allowed agencies to apply to keep documents classified and for longer periods than previous reviews. The purpose was to protect national interests and security while preventing controversial declassification of documents.

Whenever trying to instill a new policy on the government, there will be many barriers to this change. While there are fewer areas of confusion, chaos remains. Of course the disclosures by Chelsea (neé Bradley) Manning and Edward Snowden did not help.

So what does this have to do with numismatics? Both the U.S. Mint and the Bureau of Engraving and Printing applied and were granted exemption from automatically declassifying documents. 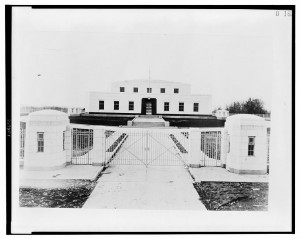 According to a memo released on September 5, 2014, the Information Security Oversight Office of the a href=”http://www.archives.gov” target=”_blank”>National Archives and Records Administration granted the U.S. Mint a 75-year exemption from automatic declassification of documents. They also granted the BEP a 25-year exemption.

What information could these agencies possibly have that would be classified?

According to Steven Aftergood, Director of the Federation of American Scientist Project on Government Secrecy, who interviewed John P. Fitzpatrick, director of the ISOO, the exemption for the U.S. Mint is for “security specifications from the U.S. Bullion Depository at Fort Knox, which was built in the late 1930s.”

Then why does the Bureau of Engraving and Printing need an exemption from declassification for 25-years? A source familiar with the filing said that the exemption covers counterfeiting information. According to sources, there are anti-counterfeiting measures added to currency that have been planned for many years that have not been advertised. These are used by the United States Secret Service and other law enforcement organizations to detect counterfeiting. Many of the documents cover the planning for the changes that began in the 1990s.

Sources also confirmed that there were other documents that the BEP and Treasury asked to be included in this exemption but not their general contents. Some hint was given that the classified information concerns long term and ongoing operations against international counterfeiters. Although not confirmed, it is suspected that the classified documents discusses enemy foreign governments actively working to counterfeit United States currency. No country was named but it has been rumored that North Korea has been attempting to counterfeit U.S. currency.

And you thought all the U.S. Mint and Bureau of Engraving and Printing did was manufacture money!

Image of Fort Knox courtesy of the Library of Congress.