Arriving in time to celebrate Festivus was my order from the U.S. Mint. The sense of timing was interesting since December 23rd was also the seventh day of Chanukah and the last of the eight candles would be lit that night and the day before Christmas Eve. Call it a celebration in a box!

In this order were my 50th Anniversary Kennedy Half-Dollar products. I first opened the 50th Anniversary Kennedy 2014 Half-Dollar Uncirculated Coin Set. Shrink wrapped, the set that sold for $9.95 was in a nice folder with a card containing two uncirculated coins in capsules embedded in the card. The half-dollars, one from Philadelphia and the other from Denver, are well struck and if I were to have them graded would probably be assigned a high grade.

Some people may balk at spending $5.00 for a half-dollar, but the presentation makes it a nice collectible even for the budget conscious. 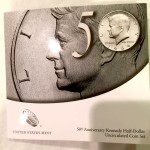 Next was the 50th Anniversary Kennedy 2014 Half-Dollar Silver Coin Collection. The set contains four 90-percent silver half-dollars struck in four different finishes: reverse proof, proof, enhanced uncirculated, and uncirculated. This boxed set contains a presentation folder, Certificate of Authenticity from the U.S. Mint, and a booklet documenting how the Kennedy half-dollar came into being following the President’s assassination.

There is a somewhat cheesiness quality about the presentation. First, the outer cardboard sleeve that surrounds the box has a design that is repeated on the box top. The same design is on the outer flap of the folder itself. Esthetically, this type of design is visually fatiguing by the time you are to the point of opening the folder. In the past, the U.S. Mint used their logo or a heraldic eagle. It broke up the visual monotony created by using the same imprint on three different surfaces.

Another problem with the product design is that the encapsulated coins are embedded into a holder that is only one sided. In order to see the reverse of the coins they have to be removed from what holds them into the folder. Unfortunately, the fitting is so tight that it I started to pull apart the part of the folder that attaches the capsules to the folder. Eventually, I used a letter opener to gently pry the capsules out of their slots so that I could see the reverses.

It was worth the trouble removing the capsules from their holders. All the coins were beautifully struck and looked great including the reverse proof struck in West Point. I love the look of the reverse proof coin. Aside from having Kennedy really standing out on the obverse, there is something regal looking about the heraldic eagle on the reverse.

At first glance there almost appears to be no difference between the proof coin, struck in Philadelphia, and the enhanced uncirculated coin struck in San Francisco. After placing the coins side-by-side it was evident that he proof coin was struck differently than the enhanced uncirculated coin. Proof coins are usually struck with more force and more than once. Looking at both coins together before using a loupe shows that the relief for the proof half-dollar was higher. You can really see the difference by looking at Kennedy’s hair which showed more definition in the proof coin. 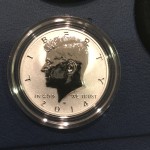 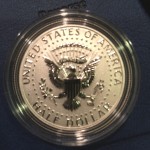 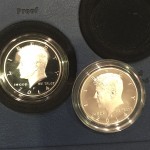 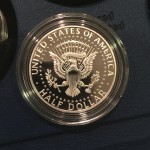 As I write this, the London Fix price of gold is $1,170 per troy ounce. If the PM Fix of gold stays below $1,200, the price of the 50th Anniversary Kennedy 2014 Half-Dollar Gold Proof Coin will drop to $1,165, down from its current $1,202 and will be $75 less than its first issued price of $1,240. Although it is not a good idea to try to time the market, I wonder if all those dealers who caused problems during the coin’s initial release are worried about their profit margins now that the price of gold is going down!