POLL: What to do about currency design 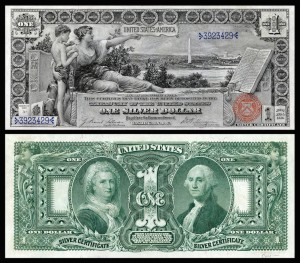 Since the Department of the Treasury announced that a redesigned $10 Federal Reserve Note will feature a woman starting in 2020, there have been more than a few articles denouncing everything about the idea from objecting to the removing of Alexander Hamilton to the fact that a woman will replace him.

The discussions have ranged from the reasoned (leave Alexander Hamilton on the $10 note because was our first Secretary of the Treasury) to the absurd (why change?) and the misogynistic that will not be repeated here.

I do not understand the the “why change” reasoning. There once was a time when there were regular changes to U.S. currency and there is no record of an uproar from the public. In 1929, the Federal Reserve reduced the size of the note from 7.375 x 3.125 inches to their present size of 6.14 x 2.61 inches. The change from Silver Certificates to Federal Reserve Notes and the color of the seals not withstanding, the designs have remained relatively the same since 1929.

According to Q. David Bowers and David M. Sundman in their book 100 Greatest American Currency Notes, the only small-sized currency notes in the list are:

Of this list, only two notes were issued for general circulation and those were emergency issues because of World War II. The others are high denomination notes not usually circulated for the general public. After all, carrying around a $1,000 note will be equivalent to carrying around $13,914.91 (according to the Bureau of Labor Statistics).

United States currency used to be beautiful. There was a regality in its design that represented the nation. Even the Education Notes from the Series of 1896 Silver Certificates were phenomenal in their design and artwork. Today’s note, while secure, do not compare to their past counterparts.

Let’s see if we can figure out what the best way forward.

What should the Treasury do about currency design?

Leave things the way they are. (34%, 10 Votes)
Change all of the portraits. It's time to give other historical figures a chance. (34%, 10 Votes)
Remove all portraits and use other designs. (21%, 6 Votes)
Designs of small size currency stinks. Leave the portraits and look at what other countries are doing for inspiration. (7%, 2 Votes)
I don't care. (3%, 1 Votes)
What difference does it make. Non-cash transactions (credit cards, e-currency) are the wave of the future. (0%, 0 Votes)

Leave any comments below!

Image courtesy of the National Numismatic Collection via Wikipedia.