Space: the final frontier.
These are the voyages of the starship Enterprise.
Its five-year mission: to explore strange new worlds,
to seek out new life and new civilizations,
to boldly go where no man has gone before. 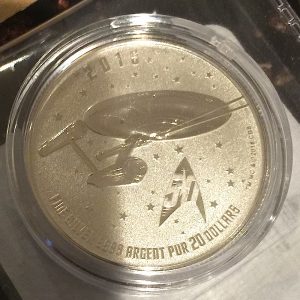 I admit to being fascinated by space and space travel. This has to go back to my watching the Mercury and Apollo missions as a youngster. Even then, I would watch most television shows that were based on space or something about space including the comedies Lost in Space and My Favorite Martian.

During its first run, I was able to watch Star Trek during its last season. When it was picked up in syndication and played on the independent television stations or late at night, I would watch and become a bigger fan. In college, it was common to walk into the TV Lounge to see the television tuned to Star Trek, especially late at night.

When Star Trek: The Motion Picture was released in 1979, I was able to see it during my December break from college. No, it wasn’t the best of the movies, but it was Star Trek. I was a fan of Star Trek: The Next Generation and I have seen all of the movies except the most recent—which I will catch when it is available on cable!

Aside from being great stories, Star Trek has inspired generations. Look at the technology that is in use today. Cell phones were inspired by the communicators; the ship’s computer with its infinite database processing is now in supercomputers of today, like IBM’s Watson; while Majel Barrett was the voice of the first computer, we now have Siri, Cortana and Alexa on portable devices; large flat screen displays are now our television; intelligent personal assistants went from the personal digital assistant (PDA) to being integrated with our computer that can now speak to us; then there is the universal translator; tablet computers; video conferencing; even something like Transparent Aluminum (Star Trek IV: The Voyage Home) exists in something called aluminum oxynitride (ALON). And remember, Scotty gave the formula for transparent aluminum using a quaint keyboard on a Macintosh!

Yes, I am a hard-core fan. But I have never been to a convention! I never really wanted to go. I did meet William Shatner when I was working for NBC, but that is another story for another time.

The Royal Canadian Mint has produced a set of coins for Star Trek fans. As part of the series, the Royal Canadian Mint produced three half-ounce silver coins with enameled images of Spock, Uhura, and Scotty; one ounce coins with images of iconic scenes: Captain Kirk in “Trouble with Tribbles,” the evil Spock and Dr. McCoy in “Mirror, Mirror,” and the time machines image that was in “The City on the Edge of Forever” which featured a guest appearance by Joan Collins. They are nice coins even though they are enameled. However, I think they are too expensive. It’s probably because of the licensing fees.

Of course, I had to get something. I decided to buy the $20 for $20 silver coin, Star Trek: Enterprise. It is a 7.96-gram silver coin with a face value of $20 with the reverse showing an image of the U.S.S. Enterprise and the Star Trek 50th Anniversary logo. The obverse has the portrait of Queen Elizabeth II, as required for all Canadian coins. While the RCM calls the finish “specimen,” it resembles a reverse proof. Not only is this $20 in Canadian funds, which is $15.22 in US funds as I type this, but there is also free shipping! 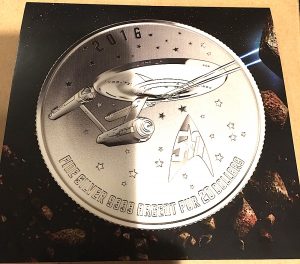 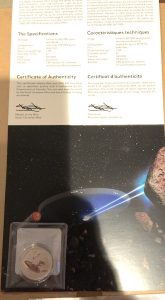 I also decided to buy was the stamp and coin set produced jointly with the RCM and Canada Post. The set includes a nickel-plated steel 25-cent coin with an engraved center surrounded by enamel ring with six different views of the U.S.S. Enterprise (NCC-1701). The stamp features Canadian-born actor William Shatner as Captain James T. Kirk with the U.S.S. Enterprise orbiting a red-colored planet in the background. Also included is a coil stamp produced as a collectible sheet featuring the U.S.S. Enterprise and a Klingon D7-class battle cruiser from the episode Day of the Dove. 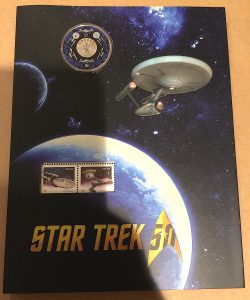 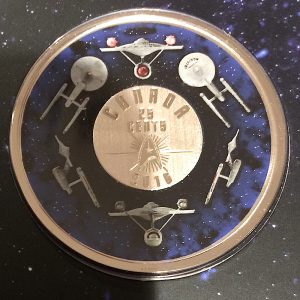 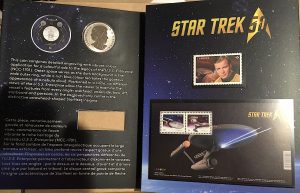 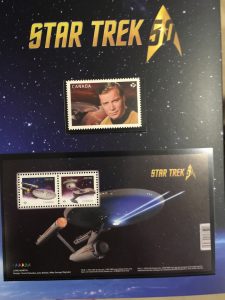 You can buy the set from the RCM for $34.95 in Canadian funds, which is $26.60 in US dollars. If you buy the stamp and coin set separately, you will pay postage. However, if you buy both coins together, the RCM picks up the postage.

Before I forget, the Royal Canadian Mint will only ship directly to addresses in Canada and the United States. Collectors in other countries will have to contact a dealer.