I guess things went well at the American Numismatic Association World’s Fair of Money. There seems to have been a little reaction on social media and some input from the regular numismatic media, but for the most part, I am going to have to wait until my coin club meeting on Tuesday to speak with those who attended. 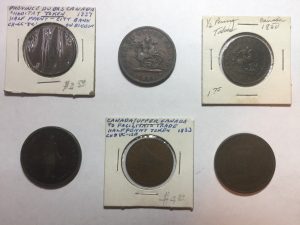 My week has not been without the ability to acquire numismatic items. While rummaging through an estate sale I found some Canadian tokens. Since I own a copy of the Breton book, Illustrated History of Coins and Tokens Relating to Canada, this will give me a chance to look into the few token I was able to buy at a very inexpensive price. Who knows, maybe this will spark another collection interest!

Finally, I want to wish my brother Joel a Happy Birthday. I cannot believe the old man is 53!

As far back as he can remember, he has collected coins. As a young boy, he tagged along with his father to coin club meetings and exhibitions, gaining an interest in Canadian pennies and U.S. cents. "I don't remember not collecting," said Hallenbeck, who owns Hallenbeck Coin Gallery at 711 N. → Read more at gazette.com

OSKALOOSA — Jerry Jenkins, a former Oskaloosa resident who now lives in Texas, recently mailed two old coins to the Oskaloosa Herald. Jenkins said he wanted the coins to be donated to Nelson Pioneer Farm and Museum as part of Mahaska County history. → Read more at oskaloosa.com

BENGALURU: Investors and history lovers made a beeline this weekend for Nanyadarshini 2017. This was the first edition of the annual numismatics exhibition post-demonetisation by the Karnataka Numismatic Society at Shikshakara Bhawan on Kempegowda Road in the city. → Read more at economictimes.indiatimes.com

Is This The Very First U.S. Coin?

In 2013, David McCarthy spotted a rare coin in an auction catalog and immediately had a hunch it was the first coin minted by the fledgling United States of America in 1783. Not the first run of coins, mind you, but the very first one. → Read more at npr.org

Did Alexander Hamilton hold this coin?

WASHINGTON (AP) — Old inns along the Revolutionary War trails boast of George Washington sleeping there. But coin experts say they have found the first silver piece minted by the United States — one likely held by the most en vogue of Founding Fathers, Alexander Hamilton. → Read more at seattletimes.com

A picturesque stretch of land in Michigan’s Upper Peninsula is set to grace a special quarter the United States Mint unveils for 2018. The Pictured Rocks National Lakeshore is among the places featuring on the reverse side for the America the Beautiful Quarters program, officials announced Wednesday at the American Numismatics Association’s World’s Fair of Money. → Read more at detroitnews.com

The design for a coin representing Voyageurs National Park was unveiled this week along with the designs for four other national sites to be included in the United States Mint multi-year "America the Beautiful Quarters" program. → Read more at ifallsjournal.com

Prince Philip Gets a Shiny New Coin for His Retirement

The Royal Mint is celebrating Prince Philip‘s retirement the same way they celebrate, well, all big royal milestones: with a new coin. The Queen‘s 96-year-old husband retired from official duties on Wednesday, after 64 years of service on behalf of the royal family. → Read more at people.com

ULAN BATOR, Aug. 3 (Xinhua) — The Central Bank of Mongolia has issued a commemorative coin dedicated to the Gobi brown bear which is on the verge of extinction. The coin made of pure silver has the shape of a circle with a diameter of 38.61 mm and a price of 300,000 togrog (122 U.S. dollars). → Read more at news.xinhuanet.com

Instead of saving money, dollar coin legislation will end up being more costly

Recently in The Hill, we heard former Reps. Jim Kolbe (R-Ariz.) and Tim Penny (D-Minn.) promote currency reforms as a way to save taxpayers money. Unfortunately, their proposed solution, The Currency Optimization, Innovation, and National Savings (COINS) Act of 2017, misses the mark completely and would move the country in exactly the wrong direction. → Read more at thehill.com