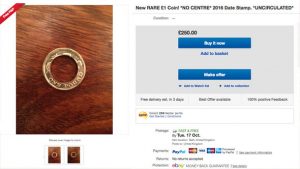 As the British are winding down the use of the Round Pound, stories are once again popping up about errors of the new 12-sided pound coin being sold for high prices on eBay.

Although the Royal Mint has admitted to manufacturing issues in trying to produce enough new pound coins to satisfy circulation requirements, their claim that the number of errors where the center are missing of the bi-metallic coins is likely post-minting errors. 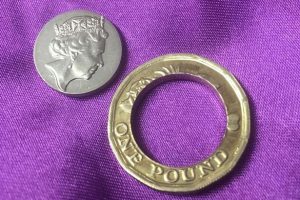 In other words, they are suggesting that people are removing the centers of the coin to claim they are errors.

To better understand why it is being claimed these are post-mint errors, I contacted a European-based dealer who has relationships with many of the continent’s mints. What follows is a summary of his explanation.

The Royal Mint coins money in a process similar to any other mint. Planchets are prepared, sent the coining press, stamped, dumped into a hopper, and sent down a conveyor where they are bagged. The bags are weight to a precise weight before the bags are accepted. Along the way, there are cameras and other sensors to detect errors.

All of the checks and sensors, including the weight of the coin, would be caught long before reaching the bagging section. Aside from the dimensions not being correct, the weight of the ring or center by themselves would not be up to the standard.

It is possible that the coins could separate in the bags during transport. However, these coins are transported to government authorized handlers. Some of them are similar to the companies that drive armored trucks here in the United States. They take the coins and prepare them for delivery to the banks.

The preparation process requires coins to be counted, rolled, and bagged. As part of the process, the coins are loaded into a system that transfers them to an automated line that brings the coins by conveyor to a machine that will either roll them or dump them in a bag. In both cases, the contents are limited by the amount they hold.

As part of the automated system, the coins are counted and check for size and weight so that if there are any coins that do not meet the Royal Mint’s standards are removed. The automated system would catch the ring and the center if they separated before the process.

Coins that are to be rolled are sent to a machine to roll them where they are counted and placed in rolls of £25 each. Those rolls are for bank and retail use and handled accordingly.

Is it possible for the coin to separate in the £100 pound bag prior to circulation? Of course, it is. However, there is one more check before the coins reach the consumer, and that is the coin-op machine itself.

Coin-op machines have mechanisms to try to prevent accepting counterfeit money and to ensure it is giving the proper change. Machines just do not eject any coin in its hopper. These checks include the weight, dimensions, and magnetic signature. The magnetic signature measures what happens after magnetic energy is flashed on the coin. Think about it as measuring how the coin would reflect light but use magnetism instead.

A pound coin that had separated would not pass the magnetic signature test and be rejected.

Although there are a number of points along the process that could fail, the number of checks between the Royal Mint and the consumer, it is highly unlikely that all of these separated pound coins exist. 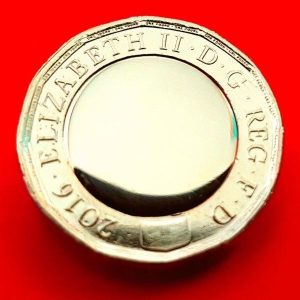 This dealer told me that he will not buy 12-sided pound coins dated 2016 without their centers. Technically, they are not coins because they originally did not have the portrait of Queen Elizabeth on the front. Under British law, all legal tender coins must have the image of the monarch on the front. In 2016, the Royal Mint created about 2000 of these 12-sided test slugs for businesses to test coin-op systems ahead of the conversion. The dealer community has serious doubts that the test slugs had these errors and believes that people separated the centers from the rings.

My dealer contact said that nobody should pay more than “three-and-a-half quid” (£3.50 or $4.64 at the current exchange rate) for just a 12-sided pound outer ring. Even if it is not a legitimate Royal Mint error it is a nice conversation piece. 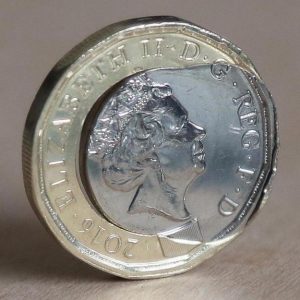 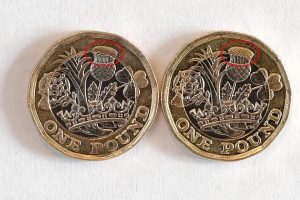