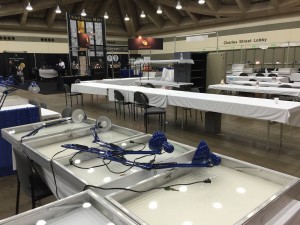 What are the future of large coin shows like Whitman Expo?

I missed posting the Weekly Numismatic World News on Sunday because I was working. As part of my collectibles business, I work a show at least once per month. These shows allow me to interact with people and find out what interests them. Even if they do not buy from my inventory, I am able to learn about the market and try to predict trends.

Sometimes, I wonder if the numismatic industry does the same thing.

Next weekend will be the Whitman Baltimore Expo at the Baltimore Convention Center. I am curious as to what I will find.

This is not Whitman’s fault. Whitman provides the venue. What are the dealers doing to meet the new demands of the market? What are the new trends? Based on my last few visits to Baltimore, you would never know that the hobby is changing. New collectors are not collecting the same coins as their parents and grandparents. New collectors are not buying in the same way as their parents and grandparents. Yet, when I go to Baltimore I will find an environment that may have been more comfortable 10 years ago than it is today.

I am not sure what needs to be changed. I will think about it when I am walking the bourse floor next weekend. But for now, the industry needs think about how to evolve. Otherwise, we could be looking for the downfall of these shows and that would be a shame.

Cache of antique coins found in drawer at Scotney Castle

Rare coins, mostly Roman, are believed to have been collected by the Kent castle’s owner, Edward Hussey, and his son

“There’s just a wide variety of things,” Rust said. “Money was issued by Mormons before they made it to Salt Lake, and then things that were issued once they were in Salt Lake.”