These introductions to the weekly news are supposed to be my thoughts and opinions on some of the things I have read while looking for numismatic-related news. For this week, I cannot think of a thing to say.

That is not exactly true. I have a lot to say but it is not numismatic-related! 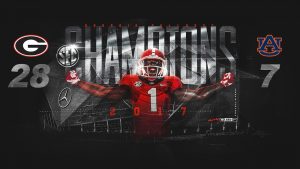 Honestly, my mind is elsewhere. It is about 600 miles to the southwest from suburban Washington, D.C. in Athens, Georgia. Not only is Athens where I attended college as an undergraduate but it is the home of the 2017 Southeastern Conference Champion University of Georgia Bulldogs!

After beating Auburn last night to win the SEC Championship and learning today that Georgia will be playing Oklahoma in the Rose Bowl for the College Football Playoff Semi-Finals, I have been just euphoric!

So that I can include some numismatic-related content, I know that the Highland Mint strikes most of the medals that are used for the coin toss around college and professional football. In 2015, the Franklin Mint was commissioned to strike the medals for the CFP games. Regardless of who gets the contract, a copy of that medal will likely end up in my collection.

The manager of the Museum of Barnstaple and North Devon has thanked people for their support after raid, as police investigate several lines of enquiry.

AIM-listed Hummingbird Resources announced that in line with the imminent commencement of production from its Yanfolila gold mine in Mali (Yanfolila), the compa

JACKSONVILLE, Fla. — Rare coins that can be potentially worth thousands of dollars may end up being worthless if a buyer doesn't do the proper vetting. Billy Ward told First Coast News he learned that lesson the hard way.

MANILA, Nov. 30 — The Bangko Sentral ng Pilipinas (BSP) announced that of the New Generation Currency (NGC) Coin Series, it will release in advance of the other denominations, the 5-piso NGC legal tender coin for circulation, starting December 2017.

Once, in a busy market, at a time when government policies had made change scarce and thus very precious, a shopkeeper refused to give a customer change in lieu of a high denomination currency note. In those days tempers were high, inconveniences great.

Why are investors putting money in palladium bullion coins?

Precious metals such as gold, silver, platinum, and palladium are used by several countries like the United States to mint coins that would satisfy investor demand who want to buy these metals in a more recognizable weight and form.

History of the UAE through its currencies and coins

Dubai: You have them in your pockets and take them wherever you go. But do you know what they’re worth apart from their face value? The dirhams in your wallet tell more than how much purchasing power you have now.

The Re 1 note has officially completed a century in its existence. The last hundred years – the first note was introduced on November 30, 1917, with the photo of King George V – have been all but tumultuous.

NEW YORK (Reuters) – Sales of U.S. Mint American Eagle gold and silver coins fell sharply year-over-year in November, keeping their tally for the first 11 months of 2017 on track for the weakest year since 2007, the latest data showed on Thursday.