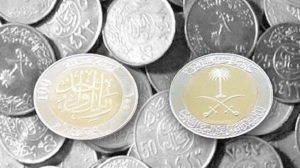 Another country has decided to stop printing its unit currency and will strike coins instead. The Saudi Arabian Monetary Authority announced that they will be replacing the one-riyal (SR1) notes with coins.

SAMA made the announcement as part of their introduction of new coin designs using modern techniques in coin manufacturing.

Under their transition plan, SAMA will allow the SR1 paper note to circulate alongside the new coin as the notes will be withdrawn from circulation. When the coins become available, the banks will be ordered to replace the SR1 note with a coin based on an availability formula that will be provided when the coins are ready for circulation.

According to Society for Worldwide Interbank Financial Telecommunication (SWIFT), the company that runs the network that enables the world’s financial institutions to security send financial transactions to each other, the United States dollar makes up 40.86-percent of every transaction in the world (as of February 2017). The United States Gross Domestic Product (GDP), the measure of an economy’s output, is over $19 trillion (in 2017 according to the International Monetary Fund) more than any country or trading cooperative (such as the European Union). But the United States is the only country ranked in the Top 10 of either of these lists to continue to produce its unit currency in paper form.

For a country that is supposed to be a leader, it looks like the United States has fallen behind the rest of the world. It is time to eliminate the one-dollar Federal Reserve Note.

A new £1 coin could actually end up earning you hundreds thanks to a Royal Mint 'error'. Three examples of the error have already been seen by ChangeChecker – and they are selling for more than £200.

The sifting project, which has operated since 2004 in the Emek Tzurim National Park, aims to salvage religious and historical artifacts from the rubble, as well as to educate the public about the veracity of Jewish history on the Mount.

Aaron Judge and Michael Conforto are two of the young stars that New York baseball fans have been buzzing about the past two years. Now fans of the Yankees and Mets outfielders can now get the star…

2018 Baseball Treasure MLB Coins checklist, release date, silver and gold coin info and all you need to know about the officially licensed set of baseball coins.

Never mind the North Korea summit. What happened to the commemorative coin?

The much-ballyhooed summit between the United States and North Korea met its end Thursday. The cancellation, for now, stamps out the prospects for peace, yet does nothing to stop the snazzy coins featuring Donald Trump and Kim Jong Un in front of patriotic backdrops surrounded by olive branches

The Saudi Arabian Monetary Authority (SAMA) will start withdrawing SR1 banknotes from the market from Thursday, SAMA has said. In a statement, SAMA announced issuing its sixth edition, which was developed during the reign of the Custodian of the Two