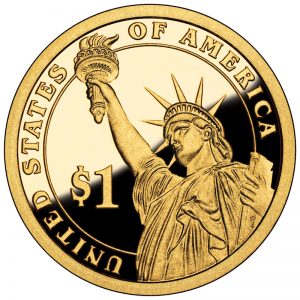 Yesterday, the House of Representatives agreed and passed the Senate’s amendment to American Innovation $1 Coin Act (H.R. 770) that changes the order of issue to be the same as that was used with the 50 State Quarters.

The next step is that the bill is engrossed, which means that it will be printed in its final form and signed by the Speaker of the House, Paul Ryan (R-WI), and the President Pro Tempore of the senate, Orrin Hatch (R-UT), certifying that the printed bill has been approved by both chambers of commerce.

Once signed, the bill is sent to the White House for the President’s signature.

If this bill was not on your radar, it requires the coins use the same Manganese-Brass composition as all dollar coins struck since 2000 with the edge lettering consisting of the year, mintmark, and the national motto E PLURIBUS UNUM. The obverse will be “a likeness of the Statue of Liberty extending to the rim of the coin and large enough to provide a dramatic representation of Liberty.” The reverse will be emblematic of an innovation, innovator, or a group of innovators significant to that state or territory.

If the president signs this bill, and there is no reason why he would veto this biil, then the program will begin in 2019.