A LOOK BACK FOLLOW-UP 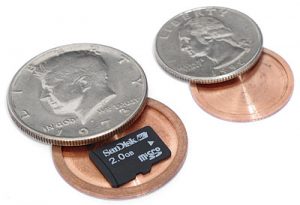 While searching for the next story in my “Look Back” series, I came across a post where it was reported that the Defense Security Services (DSS) issued a press release (see the text below) that the summary report claiming that radio frequency transmitters were found in Canadian coins is not true. “This statement was based on a report provided to DSS,” according to the release. “The allegations, however, were found later to be unsubstantiated following an investigation into the matter.”

DSS is blaming an editing error with the item appearing in the report.

Although the release said the story was not true, The Associated Press quoted agency spokeswoman Martha Deutscher saying, “What’s in the report is true. This is indeed a sanitized version, which leaves a lot of questions.”

Later in March of 2009, someone had sent a link to an online merchant that was selling hollow spy coins. They were offering hollowed out quarters or half-dollars with enough room for a very small memory card. The coins are advertised to come with an unlocking ring and are “indistinguishable from regular coins when closed.”

These coins are no longer listed on that company’s website. However, if you are interested in owning your own spy coin, you can use any search engine and search for “hollow spy coins.”

I will probably not buy one. I would be afraid to carry the quarter for fear of accidentally spending it. But keeping a hollow half-dollar as a pocket piece with some “secret” information inside of it could be fun.

The “Defense Security Service Report Statement on Canadian Coins Incorrect, 01/12/2007” press release is no longer available on the DSS website. The following text was found on the Internet Archive Wayback Machine:

A statement in the 2006 Defense Security Service Technology Collection Trends in the U.S. Defense Industry report which claimed radio frequency transmitters were discovered embedded in Canadian coins is not true, according to DSS officials.

This statement was based on a report provided to DSS. The allegations, however, were found later to be unsubstantiated following an investigation into the matter.

According to DSS officials, the 2006 annual report should not have contained this information. The acting director of the DSS directed an internal review of the circumstances leading up to the publication of this information to prevent incidents like this from reoccurring.

The 2006 DSS Technology Collection Trends in the U.S. Defense Industry report was published by DSS in June 2006. As part of its oversight responsibilities under the National Industrial Security Program, the DSS receives reports from U.S. cleared defense industry to enhance overall security awareness in cleared industry.