During the debate of the law that created the American Silver Eagle program, the gold mining interests began to lobby congress to pass a bill to allow the U.S. Mint to mint bullion coins using gold mined in the United States. A few months later, congress passed the Gold Bullion Coin Act of 1985 that created the American Eagle Gold Bullion Program.

The obverse of the coin used the design of the $20 Double Eagle coin designed by Augusts Saint-Gaudens. This design is considered by many the most beautiful of all coins produced by the U.S. Mint.

The reverse features a male bald eagle carrying an olive branch flying above a nest containing a female eagle and her hatchlings. It was designed by Miley Frances Busiek. 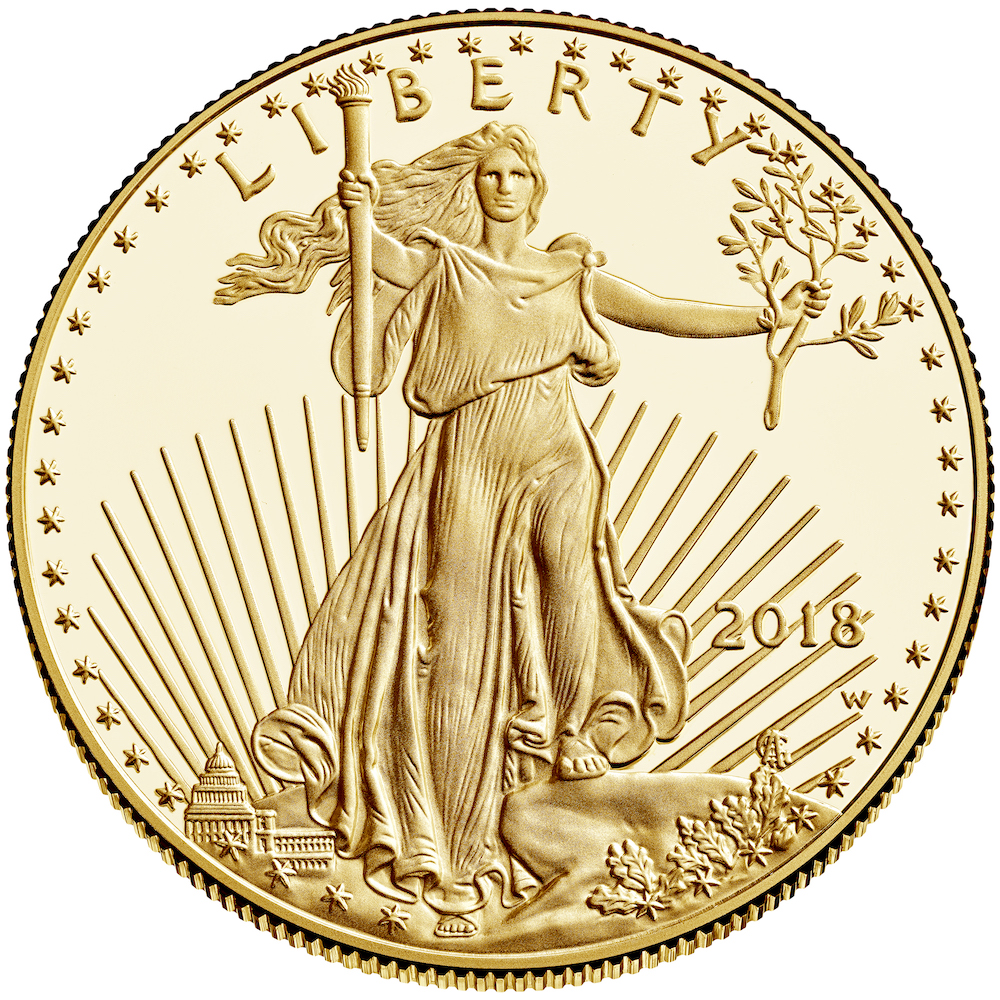 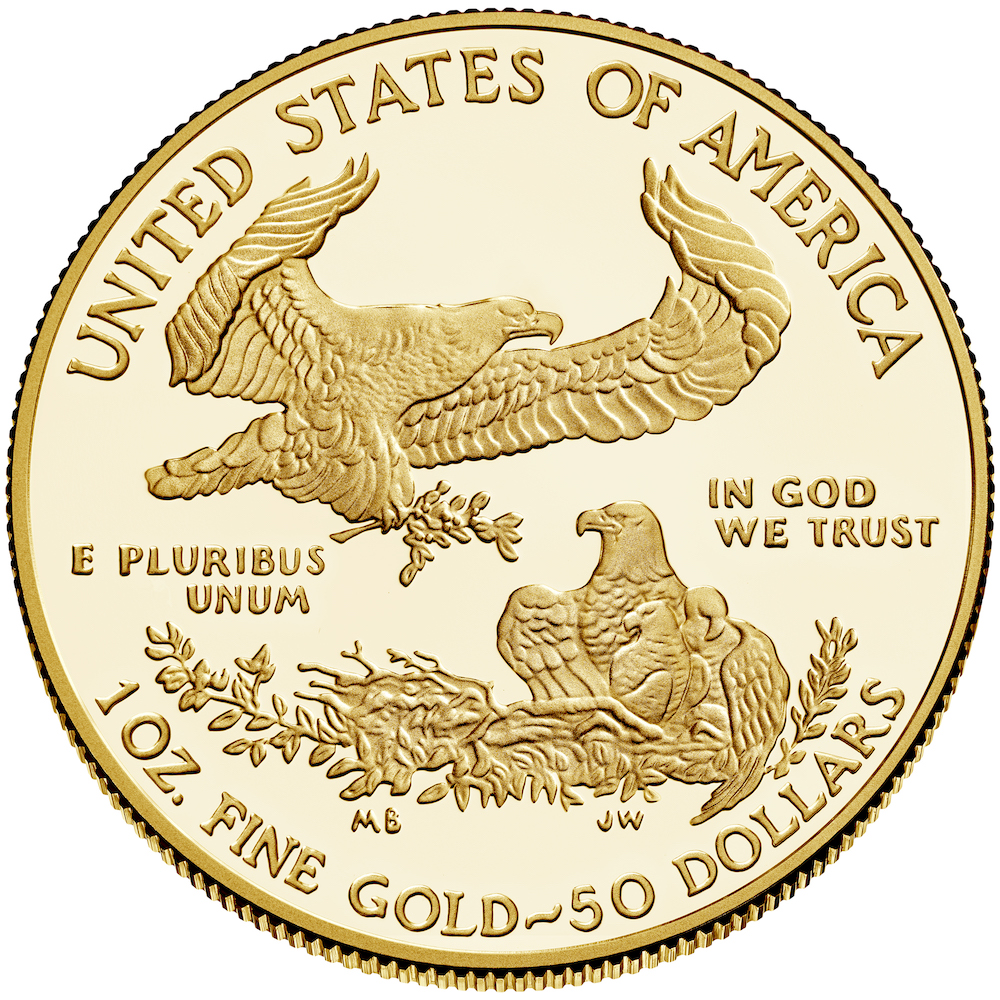 American Gold Eagle Coins are offered in four different sizes with each size being of different legal tender face value. The different coins are as follows:

Each coin is made from 22-karat gold. The composition is comprised of 91.67% gold, 3% silver, and 5.33% copper. The coins are produced so that each size contains its stated weight in pure gold. This means that the coins are heavier than their pure gold weight to account for the silver and copper.

The American Gold Eagle program produces bullion and collectible coins. The bullion coins can be stuck at any branch mint but does not have a mintmark. Bullion coins are sold in bulk to special dealers who then sell it to retailers. They are struck for the investment market.

Although some people do collect bullion coins they are not produced or marketed for the collector market. As with other investments, American Gold Eagle bullion coins are subject to taxes when sold. Please consult your financial advisor or tax professional for the tax implications for your situation.

American Gold Eagle Poof coins are sold individually or in a four-coin set. The coins sold by the U.S. Mint are stored in a specially made capsule and that capsule is placed in a special folder-like packaging. The folders are distributed in a brown box with a Certificate of Authenticity.

In 1999, there was an incredible demand for gold bullion. In the rush to produce $5 one-tenth ounce and $10 one-quarter ounce bullion coins to satisfy market demand, the West Point Mint mistakenly struck coins using unfinished dies made that were supposed to be for proof coins.

These dies were considered unfinished because they did not receive their final finishing treatment that would be used for proof coins.

As a result, about 4,000-6,000 American Gold Eagle 1999 bullion coins were struck with the "W" mintmark and the higher relief of proof coins.  Since most of these coins may be in bullion holdings, experts are not sure how rare these coins may be. However, few have been seen for sale on the secondary market.

The 2006-W American Gold Eagle Reverse Proof was unique to the 20th Anniversary set. The raised design elements of the coin are mirrored and the background fields are frosted. This is the reverse of the typical cameo proof finish. Because of this, many of these sets were broken up and the coins encapsulated in third-party grading service holders.

A second 20th Anniversary Set included a one-ounce 2006-W American Gold Eagle Uncirculated coin and 2006-W American Silver Eagle Uncirculated coin. Both coins were treated giving them a burnished finish. Since both coins were available to be purchased individually with over 19,000 produced, it is easier to find a set in its original government packaging.

During the course of the American Gold Eagle Program, the U.S. Mint has offered proof coins for the collector they sold directly through their sales channels. Collectors could purchase each coin individually in a presentation case or all four coins as a set.

When searching for American Gold Eagle Proof coins on eBay, be careful not to buy a lot with just the original government package (OGP) and no coins. It is common for collectors to remove the coins from the OGP and send them to a third-party grading service for encapsulation. Collectors and dealers will try to sell the OGP without the coins for people who have the coins but not the package.

The OGP without the coins have no collector value.

Starting in 2006, the U.S. Mint has offered an uncirculated American Silver Eagle coins struck on specially burnished gold blanks. The burnishing gives the coin a satin finish that distinguishes this version from the bullion coin. These coins were offered from 2006-2008 and 2011 to present. Because of the increased demand for the gold bullion coins in 2009 and 2010, the U.S. Mint did not produce burnished collector coins so that the blanks can be used for fulfilling the bullion demand.

Similar to the proof collector coins, many of these coins were removed from their OGP and encapsulated by third-party grading services. The warning about sellers offering the OGP for sale without coins applies for the uncirculated burnished coins.

Rolls and the Monster Box

When the U.S. Mint sells bullion coins to their authorized resellers, the coins are packaged in 20-coin hard plastic rolls and 25 rolls are placed in a specially designed box that contains 500 troy ounces of silver. Rolls are topped with red caps and the boxes storing the rolls are red.

Although you may be able to find rolls and monster boxes of American Gold Eagle for sale, the price will be commensurate with the price of the coins. However, some dealers have tried to sell the boxes to anyone interested.

In our next installment, we look at the American Platinum Eagles.