A Look at the American Eagles: The New American Palladium Eagles

The American Palladium Eagle coin is the newest addition to the American Eagle program. The bill to create the program was introduced by Rep. Denny Rehberg (R-MT), the representative-at-large from Montana. Montana is home of the Stillwater Mining Company, the only producer of palladium in the United States. Stillwater also owns platinum mines that supply the U.S. Mint with platinum for American Eagle Bullion coins.

The American Eagle Palladium Bullion Coin Act (Public Law 111-303) originally requested that the secretary study the feasibility of striking palladium coins and mint them if the study shows a market demand. Although the study showed that there is a market, it was not overwhelming. Based on the wording of the law, the U.S. Mint opted not to strike palladium coins.

A difference between the authorizing law for the American Palladium Eagle and other coins in the American Eagle program is that there is no requirement for the U.S. Mint to produce proof coins. It will be up to the U.S. Mint to determine whether there is a collector demand and strike proof coins accordingly. How this differs from the rest of the American Eagle program will be tested the next time metals experience high investor demand.

By law, the obverse of the American Palladium Eagle coin features a high-relief likeness of the “Winged Liberty” design used on the obverse of Mercury Dime. It is an acclaimed classical design as created by Adolph A. Weinman.

The law requires that the reverse used to bear a high-relief version of the reverse design of the 1907 American Institute of Architects medal. The AIA medal was also designed by Weinman. It is the first time that this design is featured on a legal tender coin. 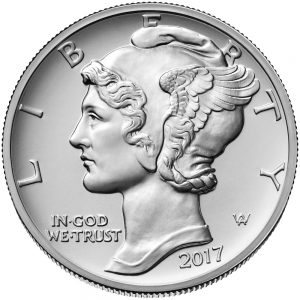 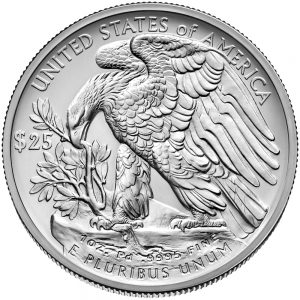 Reverse is the design used on the 1907 American Institute of Architects medal designed by Adolph A. Weinman

American Palladium Eagle coins are made from one troy ounce of .9995 palladium. The balance is copper. These coins are produced so that each coin states its weight and fineness and has a denomination of $25.

The American Palladium Eagle program produces bullion and collectible coins. The bullion coins can be stuck at any branch mint but do not have a mintmark. Bullion coins are sold in bulk to special dealers who then sell it to retailers. They are struck for the investment market.

Although some people do collect bullion coins there are not produced for the collector market. As with other investments, American Palladium Eagle bullion coins are subject to taxes when sold and may be held in Individual Retirement accounts. Please consult your financial advisor or tax professional for the tax implications for your situation.

The U.S. Mint began selling American Palladium Eagle Proof coins in 2018 with a limited production of 15,000 coins. The coins sold by the U.S. Mint are stored in a specially made capsule and that capsule is placed in a package similar to that used for other coins in the American Eagle program.

Since this program is new, there have been no special issues or the discovery of errors. As time passes, that will likely change.