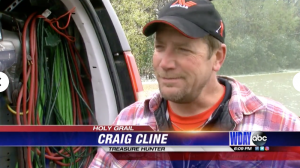 There are people with more time an patience who are able to go into the fields and forests with a metal detector to find relics of the past. Here, in the original 13 colonies, it is common for detectorists ton find Civil War-era bullets or Revolutionary-era uniform buttons. Some find coins. Usually, it is easier to find copper coins, especially the U.S. large cents that were heavily used on the east coast.

This week’s story takes us to the Red River Valley outside of Fargo, North Dakota where a hobbyist finds an 18th century silver Spanish Real under a tree.

The Red River is a north-flowing river that begins at the confluence of the Bois de Sioux and Otter Tail rivers, on the border of Wahpeton, North Dakota and Breckenridge, Minnesota. At its northernmost point, it empties into the Lake Winnipeg in Canada.

Finding anything buried in the ground that is pre-Revolutionary War period would be a fantastic fine. But the finder of this Spanish Real coin believes it was either pocket change or money used to bargain with the Native Americans.

The land where my house stands was once farmland prior to homes being built. There are records of soldiers being quartered in this area. I wonder if there are relics waiting for be found.

The US Mint unveils a coin designed to mark the 50th anniversary of NASA's Apollo 11 mission in 2019.

FARGO—Craig Cline of Fargo has done his share of treasure hunting. The carpenter-handyman and his metal detector have searched Fargo-Moorhead parks and fields looking for that one rare part of our past. Well, he found it.

Farmers in northwest Poland have unearthed silver coins, including rare Arabic dirhams, along with a slew of other artifacts, Britain’s The Daily Mail reported. Farmers in the region have been ploughing along a sloped field for decades. More than 300

The U.S. Mint has taken "one small step" towards the striking of new coins to mark the 50th anniversary of the first moon landing with the reveal of the design for its 2019 commemoratives. The gold, silver and clad coins will feature an astronaut’s boot p