Members of the American Numismatic Association who opted into online voting should have received the election announcement via email. If you think you did request the electronic voting option and did not receive your notice, check your spam folder.

Those who are not signed up for electronic voting should receive a paper ballot in the mail shortly. Deadline to vote using either method is July 1, 2019. 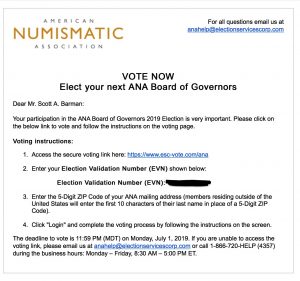 Three of the current member of the Board of Governors are running for higher office, meaning that there will be at least three new Board members.

Maybe there should be at least four new board members.

It has been a long tradition in United States populist society to “throw the bastards out” dating back to the antebellum South where the southern Democrats ran dirty campaigns and even fixed ballots to weaken the Whig Party that was anti-slavery. Newspapers at the time suggested that if the pols do not protect the southern traditions then vote them out.

Just remember, dirty politics pre-dates the founding of the United States as an independent country. In the 1820s, the movement found a rallying cry.

The ANA has had its “throw the bastards out” situation a few years ago after former ANA Executive Director Larry Shepherd file a lawsuit against the ANA and fired Jeff Shevlin as executive director. It was clear that there were problems, which attracted a large field fo candidates for the seven seats on the Board of Governors. I was one of the candidates.

There was quite a change in made in that election. Unfortunately, a few of the members that were voted in during that election remain. As someone who likes to see change and believes in term limit, anyone elected in 2013 should be retired from the Board of Governors. It has nothing to do with their qualifications, but there is a time for new ideas to replace the old.

Numismatics is not a dying hobby. For as long as physical currency is in use, there will be someone to collect those items and the billions of coins already in collections around the world. But there is some trouble in the hobby.

The ANA has to figure out its long-term direction in the context of today’s society. Kids are no longer checking mom and dad’s pocket change looking for coins. They are not encouraged to do so, but there are no incentives for them to begin. There is no long term encouragement.

We have to adapt to a new way of thinking. Unfortunately, very few of the candidates’ statements show that they are seriously thinking about the future.

Change begins with change. It is time for those who have served to retire from the Board and let others step forward. Let’s thank them for their service and allow them to move on.

It may not be a revolution, but evolution is necessary.

In a few weeks, I will post my endorsements.

Until then, I welcome your thoughts.