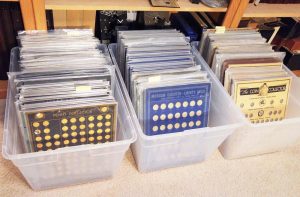 There are very few people who can amass a collection of everything dealing with one topic. Even the most famous collections limited their scope to something specific. The National Numismatic Collection has its limits. It is why when someone like David Lange makes a significant purchase of coin boards, it is exciting news for the hobby.

Coin boards came before folders and albums. They provided a way for collectors to organize their coin collection. Some dealers used them as an incentive to have people pick coins out of pocket change to sell back to the dealer. The dealer would give the board away with the offer of a reward for bringing it back once it is full of coins.

David Lange is the hobby’s leading expert on coin boards. This past week, Lange announced that he purchased a lot of more than 400 coin boards from a midwest collector dubbed the “Midwest Collection.” The hoard includes several rare coin boards.

Lange’s fascination with coin boards is evident in the three books he has published about them. The most popular is his first book, Coin Collecting Boards of the 1930s & 1940s. It is a recommended book for anyone who wants to know more about numismatic history. He is now selling the book for $19.95 ($14.95 plus $5 for shipping). See his website for more details.

Even if you do not collect coin boards, it is good that there is someone like David Lange to preserve this aspect of the hobby. Otherwise, this aspect of numismatic history would get lost and forgotten. That would be a tragedy.

The U.S. Mint, Washington, suspended its mutilated coin redemption program this May. The U.S.

The Royal Mint has unveiled a series of special £2 coins to mark 75 years since the D-Day landings. The coins pay tribute to those involved in the events on June 6, 1944, which are widely seen as a key turning point in the Second World War.

How did these two coins, believed to be Spanish pieces dating to the 13th century, get to Glen Canyon NRA?/NPS

The Royal Mint produced no &pound;2 or 20p coins in 2017 as people used change in a rush to get rid of their pound coins as the old ones went out of circulation.

'It could change everything': coin found off northern Australia may be from pre-1400 Africa

More than 3,000 4th Century Roman coins were found in a buried pot in Lincolnshire.