Although it has been a while since I have posted something outside of the Weekly World Numismatic News, it does not mean that I have been idle. Here are some random thoughts: 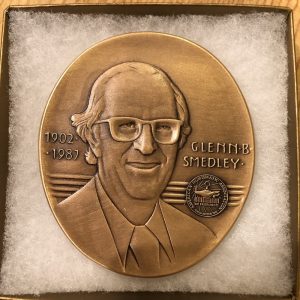 First, I want to thank the American Numismatic Association Board of Governors for awarding me the 2019 Glenn Smedley Memorial Award. It is an honor! I wish I could have been there for the award ceremony.

ANA President Steve Ellsworth asked me to continue as Chair of the Technology Committee. I accepted his appointment. Steve has a different vision for how to move forward. Change is a good thing and will work with him and the Board to do what is best for the ANA. 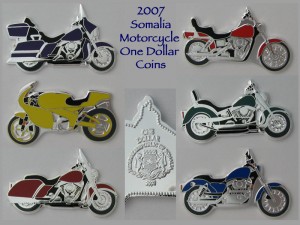 2007 Somalia Motorcycle Coins
I love these coins but is this the direction the U.S. Mint should go?

Not long ago, U.S. Mint Director David Ryder said that there might be a chance to add color to the Naismith Memorial Basketball Hall of Fame Commemorative Coins. I have had a mixed feeling about adding color to coins. There are some cases where the color acted as an enhancer. Other times, some mints produced coins that were discs with prints. I will wait until the design is released to decide how I feel about the Mint’s attempt with color.

There are many collectibles whose values have declined over the last year, including some collector coins. One area that remains low are those collector sets produced by the television hucksters or the private mints. These firms overhype the value of their wares to convince buyers that they should purchase them as an investment. Recently, I handled an estate with several items purchased from QVC and the Franklin Mint. All of the coins were overpriced. The family was upset when I provided my valuation. I will talk about this more in a future post.

Another article idea that is inspired by my business is the difference between collecting and investing. Although some people like to try to mix the two, most of the time, the result is that the investor does not create a compelling collection while most of the collectors create value without trying. 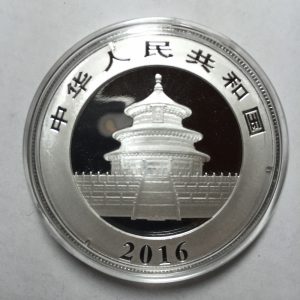 I sold my silver Pandas. I lost interest after the composition was changed but the hype has kept the prices up. Hype is not a long-term strategy.

Recently, I decided to liquidate part of my collection. As part of the process, I realized how much I have learned over the years. It is a real case of “the more you know, the more you realize what you don’t know.” I learned several lessons during this process, including not to trust my judgment. In one case, coins I graded years ago were over graded. If I would have used the tools and knowledge, I have today, and the grades would be different.

Finally, I am still waiting to find a “W” quarter in change. I have yet to see one. Most of the people I know that are looking for these quarters are roll hunting. If I were into conspiracies, I would suggest that the Mint did this on purpose to increase the demand for quarters. People would demand rolls of quarters, forcing the Federal Reserve to order more.

Considering the U.S. Mint is a government agency, I bet they are storing most of the quarters in Area 51! After all, if we are going into conspiracy theories, we might as well go all of the way!