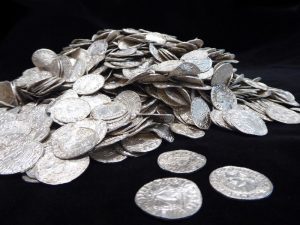 While talking about the hoard of coins that dates back to the time of William the Conqueror in England, someone said that they wished they could find treasures like that in the United States. That prompted me to talk with metal detector enthusiasts to hear their stories.

One of the people I spoke with regularly uses a metal detector around the Eastern Shore of Maryland and into Delaware. Although most of the coins found are from the 20th century, many of the finds include artifacts leftover from earlier settlers. They have found some older copper coins, buttons and bullets from the Civil War, and utensils dating to the colonial period.

The leader of a small group of enthusiasts travels the midwest along know migration trails. Some are now roads and highways, while others have returned to nature. They regularly find artifacts of life on the move. Although they rarely find money, the items they find have made their way into museums and university research centers that study the lives of the western migrants.

Finally, someone who has explored eastern Washington, Idaho, western Montana and Canada discovered artifacts that confirmed and expanded the stories of border disputes in that area. In that era, the disputes were not about security but about who claimed the profit from the resources.

Although metal detector finds in the United States may not find anything more valuable than a few coins, bullets, and buttons, they do find the evidence of history. Unless you stumble over another Saddle Ridge Hoard, finding history can be as gratifying.

Shortly after the Battle of Hastings in 1066, a wealthy local buried a trove of 2,528 coins in what is now Somerset, England. Featuring the likenesses of both Harold II—the country’s last crowned Anglo-Saxon king—and his successor, William the Conqueror, the hoard is the largest collection of post-Norman Conquest coins found to date.

Why gamblers loved the 50-cent coin

Manitoba lottery officials modify their machines to close a loophole exploited by gamblers. 1:32 When was the last time you saw a 50-cent piece?

The $1 Red-Back Spider Coin Is Freaking Me Out

In mid-September, Macquarie Mint will release 500 Red-Back Spider $1 coins as part of its aptly named 'Deadly & Dangerous' collection. There are six more in the series, ranging from the dingo to the great white shark.

Better known for lagging, sagging, floundering and falling, Canadian currency now boasts a distinction both impressive and unique: It pulsates. Well, one $10 silver collector’s coin appears to do so thanks to a “numismatic breakthrough” that the Royal Canadian Mint heralds as a world-first.

OTTAWA , Sept. 3, 2019 /CNW/ – The Royal Canadian Mint is proud to launch a numismatic breakthrough from its ambitious and creative Research and Development team. Working with the University of Ottawa's Centre for Research in Photonics, the R+D team has created the 2020 $10 Fine Silver Coin – Pulsating Maple Leaf, engraved with an array of sub-millimeter-scale mirrors in the shape of a maple leaf on the reverse of this 99.99% pure silver coin.

As the 150th anniversary of the opening of the U.S. Branch Mint in Carson City draws closer, the Nevada State Museum is expanding the days it showcases one of the Mint’s most enduring artifacts. For much of the summer, the museum has been giving history lessons and minting medallions every Friday on Historic Coin Press 1 — the original coin press used when the Mint opened in February 1870.

TORONTO, Sept. 4, 2019 /CNW/ – For the first time in three decades, Canada's rarest coin – the 1911 silver dollar – will be on public display in its home country. This weekend, on Sept. 7-8, the 108-year-old silver dollar will be displayed at the National Postage Stamp and Coin Show, to be held at the Hilton Mississauga/Meadowvale.

Rare currency expert Alfredo Cimino has never seen the 1911 silver dollar, but he’s heard of it. Everyone in the business has. Nicknamed the Emperor or Holy Grail of Canadian coins, it’s held many heavyweight titles in the world of numismatics, or professional coin collection and study, including the world’s most valuable coin, in 1965, and Canada’s rarest coin, which it retains to this day.

A rare example of Bermuda “Hogge Money” — a coin which was produced in the early 1600s — sold for $96,000 when it was auctioned last night, with the coin one of only eight examples known to exist. “The Sommer Islands coinage was produced in England circa 1616 for use in the British colony now known as Bermuda,” the auction house noted, with the “Hogge Money” coins issued in four denominations: shilling, sixpence, threepence, and twopence.

SPRINGFIELD, Mass. — As special as it is for those involved, a class of new members gets enshrined annually in the Naismith Memorial Basketball Hall of Fame. That makes it somewhat less exclusive than the minting of a coin – which is part of this year’s ceremony as well.