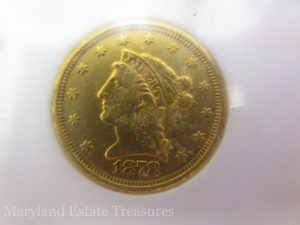 One of the reasons for my limited posting is that I started a business in collectibles and estate downsizing. Until now, I had not received many numismatic consignments. The few numismatic items that consignors have brought in were not exciting.

A few weeks ago, someone walked into the shop and asked about consigning coins. The coins were something he inherited and did not know what to do with them. Then my consignor removed an 1878 Liberty $2½ quarter eagle gold coin in a Capital Plastics holder. It is a beautiful coin in hand. It looks uncirculated.

Although the 1984 U.S. Olympics Commemorative Set sare not popular, he handed two of the three-coin sets with the gold coin.

He continued to empty the bag, and I found Morgan and Peace dollars, Seated Liberty quarters, and a few other coins.

While unpacking another consignment, there was a 1 gram gold bar mixed in amongst the papers.

Finally, someone brought in the few Israeli coins and medals his late father owned.

Put it all together, add a few of my surplus coins, and there are 54 total coins in my company’s current auction.

Here is a small sample of some of the coins in this auction:

If you want more than coins, check out the rest of the auction which includes sports autographs (like a Joe Montana autographed football), art (two prints from Yaacov Agam), a Black Forest Cukoo Clock (it works!), and so much more. Feel free to peruse the entire 284 lot auction.

But don’t forget the coins, including this 2005 Canadian Silver Maple Leaf silver bullion coin with a Rooster Privy Mark. 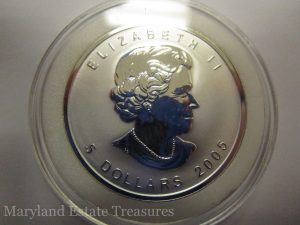 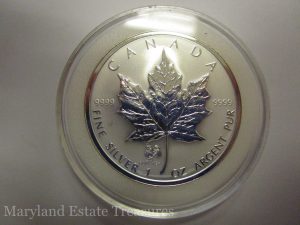