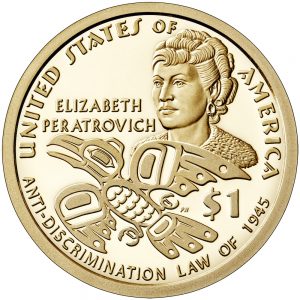 In our never-ending quest to convince more people to be interested in coin collecting, this week’s news provided us with another example of “if you do something that people like, they will be interested.”

As the U.S. Mint released the Native American dollar coin with the image of Civil Rights leader Elizabeth Peratrovich, Alaskans are clamoring for a wider release of the coin. It is the first time since the early days of the small-dollar programs that there is a broad interest in $1 coins.

Elizabeth Peratrovich was an Alaskan native who was instrumental in having Alaska’s Anti-Discrimination Law passed by the territorial government. It was the first anti-discrimination law of any type passed in the United States.

Alaskans are asking that the Federal Reserve release 5 million coins into general circulation. The Seattle Branch of the San Francisco Federal Reserve Bank is responsible for banking in Alaska.

Although the Federal Reserve has not publically responded, they should be talking with the U.S. Mint to strike the 5 million coins necessary to send to Alaska. The coins may not circulate, but it is an excellent promotion for coin collecting.

Over the last few years, we have learned that interesting themes have sold well. Look at the interest in the American Somoa National Park fruit bat design. It is a well-executed design that is very interesting and has people looking for the coin in change. It will likely be in the one America the Beautiful Quarter in the most demand.

You do not have to be a rocket scientist or a marketing guru to understand people will buy what they like. It is why the Royal Canadian Mint and the New Zealand Mint sign deals with entertainment companies to sell coins with movies, comics, and other images. These coins sell.

Unfortunately, we have a congress in the way that prevents the U.S. Mint from expanding its product line. Without being able to create collector coins for a new audience, we will continue to try to figure out ways to do the impossible: get more people interested in collecting coins.

Antiques Road Trip is back on our screens this February 2020, with more antiques experts ready to haggle and bag a bargain. Each series follows the same premise, as two experts head out across the country, scouring for the best finds they can then take to auction.

→ Read more at realitytitbit.com
Biggest collection of Celtic coins ever is worth $12 million

A collection of Celtic coins in a Jersey museum has received a Guinness World Record for the largest collection of Iron Age coins discovered in the United Kingdom or Ireland. The total number of coins found in the huge hoard was a staggering 69,347, overtaking the previous record of 54,951 coins held by a collection in Wiltshire.

OTTAWA — Willie O'Ree's image is on a plaque in the Hockey Hall of Fame, a likeness of his trademark fedora sits atop an NHL award that bears his name, and two hockey rinks in the United States and Canada are named in his honor.

Before the $20 bill is redesigned, Harriet Tubman could appear on a coin.