More than just a sales failure 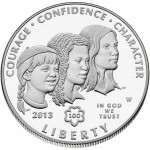 For the first time the U.S. Mint’s history, an organization did not receive a payout from a commemorative minted for them.

Following the close of the year, the U.S. Mint told Coin World that the sales of the 2013-W Girl Scouts of the USA Centennial Commemorative coins was so low that it did not cover the costs of the program as required by law. U.S. Mint records show that 86,354 proof and 37,463 uncirculated coins were sold for a total of 123,817 coins. That is a little more than 35-percent of the 350,000 authorized by the law.

Sales of the 2013-W Girl Scouts of the USA Centennial Commemorative coins was to have ended on December 17, 2013 but the U.S. Mint extended the sale through December 31, 2013. By law, a commemorative coin can only be sold in the year it was struck.

The U.S. Mint cannot be faulted for this lack of interest. Information about the coin had been a fixture of the front page of the U.S. Mint’s website. Their information included a video introduction by United States Treasurer Rosie Rios and provided information in its various outreach programs. The U.S. Mint is limited on the type of advertising it is allowed to use.

Usually, the burden of advertising falls to the organization that would most benefit from the sale of the commemorative coin. Since I do not have a connection with Girl Scouts of the USA, I cannot report on their promotional experience.

This news is both sad and troubling. Although there are collectors who will buy the coin to be part of their commemorative collection, the real success or failure of a commemorative coin is based on its subject. For whatever reasons, the Girl Scouts was not a popular subject.

When a commemorative is made for an organization, purchasers want some affinity for the organization. Unless you are a collector, you are not going to buy a coin honoring that organization, especially when the price is over $50 during a recovering economy. I wonder if a clad half-dollar may have been a better idea?

While having a program to honor the centennial of the Girl Scouts of the U.S.A. was a laudable idea, maybe it was not a good one. It was a coin with a limited appeal and those in the target audience did not respond.

It is also troubling that the Girl Scouts were not able to generate more sales on its own. In coming up over 31,000 coins short of being able to receive the payout, it is time to question the diversity of the hobby—again.

Numismatics is dominated by middle-aged to older white males. While there is an outreach to young numismatists, those programs appear to succeed in recruiting mostly white boys and keeping them interested until they become 18 years old.

Consequently, there appears to be no concentration on providing opportunities to young girls and minorities. While the Boy Scouts provide one outlet, local experience shows that those troops are dominated by young white males. Surely there are girls and minorities interested in numismatics. If not, why not?

If anyone missed the point, the executive directors of the American Numismatic Association and Industry Council for Tangible Assets (ICTA) are women. I do not believe either have their jobs because they are women. They are qualified people leading an industry that happens to male dominated.

There has to be a way to appeal to the demographics that are not being represented in the hobby. Aside from women and minorities, the hobby has to figure out how to engage those older than young numismatist (YN) but younger than middle-age. There has to be a way to keep them interested if they started as a YN or grab their interest before middle age. In 2011 I addressed these issues calling potential members the “Lost Demographic.” There have been little changes since.

What will it take to expand the hobby to all sectors of society? Please feel free to let me know in the comments section below. We can all work together for the betterment of the hobby!