Show of hands: how many of you have found an old coin only to think it was a reproduction?

As an avid junk box diver at flea markets, antique shows, and other venues, I regularly come across reproductions of old coins made of various materials. The most common are brass and pewter.

In 2018, someone found a pewter coin that resembles a Continental Currency dollar in the same design as the Fugio Cent. After consulting a dealer, the coin was sent to Professional Coin Grading Service for authentication.

PCGS determined that it was a period created coin. They graded it MS-62. 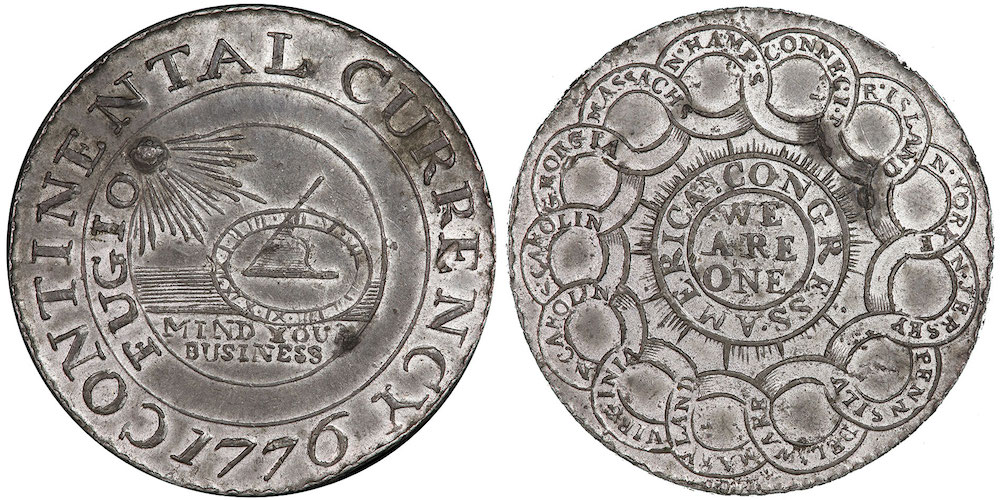 It is not clear where the coin was made. Some experts say that it was a pattern made in Philadelphia. Others speculate that it was made in England as a satire piece to mock the newly formed country.

The problem is that PCGS does not describe the criteria that they used to determine the coin is authentic. Neither their public news article or the PCGS Coin Fact entry does not provide details of what makes this a genuine coin. With all due respect to PCGS, I have learned the hardway: trust but verify!
https://www.pcgs.com/news/pcgs-paris-office-certifies-1776-continental-dollar?gid=47
https://www.pcgs.com/coinfacts/coin/1776-1-curency-pewter/794

Someday, I hope to find something similar in one of my junk box dives. But I hope PCGS would help the community by publishing what to look for when junk box diving. I would not mind sending a proper find for authentication, but I do not want to pay for a service if it is not necessary.

The Carson City Mint operated from 1870 until it stopped producing coins in 1893, and was finally closed entirely in 1933. The historic building remained unoccupied until 1941, when it was selected to be the site for the Nevada State Museum.

PHILADELPHIA — Julius Erving and fellow basketball hall-of-famer Sheryl Swoopes struck fear in the opposition on the court. On Tuesday, they struck coins at the U.S. Mint in Philadelphia, unveiling a special commemorative coin expected to raise as much as $10 million for Springfield’s Naismith Memorial Basketball Hall of Fame.

→ Read more at masslive.com
How much should a thief have to repay for stealing collector coins? Not $87K, split Pa. court says

→ Read more at pennlive.com
Rare million dollar Baltimore coin to be auctioned off

WABASSO, Fla. (WPTV/CNN) – A group of friends in Florida loves to look for buried treasure and last week they found a trove of silver coins that are 300-years old. The skies are overcast and rain's moving closer to the beaches along Hutchinson Island while people seek cover, but it's the perfect time to dig for treasure in the sand.

A RARE 1776 continental dollar bought at a French flea market for 56 cents is now worth a stunning $100,000. The anonymous buyer picked up the rare coin in June 2018, thinking it was just a piece of junk, but it turned out the coin was a rare treasure printed in the year of American independence.

"The large coin had letters similar to the Arabic language on it while the smaller coins had Hindu gods on them," a source who was present at the site tells TNM. It was close to 10 am on Wednesday morning and workers at the Jambukeswar Akilandeshwari in temple were clearing a space behind the Prasanna Pulaiyar sannidhi.