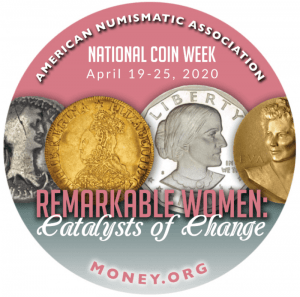 Earlier this week, Roundtable Trading announced that the Great American Coin Hunt that is part National Coin Week would go on as planned.

During the week of April 19-25, 2020, coin dealers will attempt to place collector coins into circulation. Those finding coins are encouraged to log onto social media and show off their finds using the hashtag #GreatAmericanCoinHunt.

Who is spending money and where are they spending it?

With the current COVID-19 stay-at-home orders, The number of places that are now taking cash payments has dwindled. Patrons of restaurants and encouraged to use online ordering and payments before arriving. Delivery services also want items paid for before making the trip to your front door.

In states that have laws that require retail stores to accept cash, retailers are requesting that customers limit “payment options to credit cards/debit cards… to minimize physical contact.”

The PaymentsJournal, a payments industry publications, reported that a study released by RTi Research shows an increase in people showing concern about catching coronavirus from using cash. The studies show that more people have used less cash, and more will use less cash in the future.

If consumers are using less cash in the fewer open retail outlets, then how successful will a coin drop be?

Dear Reader,  In line with the resolution of the European Parliament and of the Council of April 27, 2016  on the protection of natural persons with regard to the processing of personal data and on the free movement of such data, and repealing Directive 95/46/EC (General Data Protection Regulation), we are informing you that we are processing your data.

Strengths • The best performing precious metal for the week was gold, off only 0.45 percent. The yellow metal is continuing its strong showing.

A new Irish bullion company has achieved 70% of its yearly target in their last three weeks of trading. Investors have rushed to the precious metal as the price of gold drifts upwards.

A proposal to land the Apollo lunar module on the reverse side of a new $1 coin has been waved off by the committees reviewing the design.

Parents and children across the nation are finding themselves at home and looking for things to fill their time and keep their minds active. These are troubling times but there is a silver lining. Americans have found an opportunity to slow down and reconnect with their families. Coin collecting can be an enjoyable and wholesome escape from television and electronic devices. That is why US coin dealers and collectors alike from coast to coast are pledging to give away coins and coin albums to parents for their kids.

— A very (very) small portion of the metal in NASA's official Apollo 13 50th anniversary medallions flew to the moon and back — just like the mission the bronze pieces serve to commemorate.  The medallions, which were created for NASA by Winco International of California, are among several new mementos and limited edition products that celebrate the Apollo 13 mission half a century after it "had a problem."

Lecturer Jamie Pringle has unearthed a medieval coin under his raspberry patch after doing a spot of weeding during lockdown. He was trying to stave off boredom when he headed into the back garden of his three-bedroom semi in Hartshill.