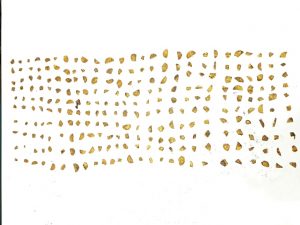 There were two items this week of a particular note. First, two Israeli teenagers found a hoard of gold coins that experts say date back to the 9th century.

The jar of coins found consists of 425 24-karat gold coins weighing 845 grams (1.86 pounds). Most of the coins are cut to that were once used as change.

Finding a hoard of gold coins and the surrounding artifacts will help archeologists learn more about the region’s commerce. Once again, numismatics helps scientists better understand our history.

The following video from the IAA talks about the project and finding the coins.

The other news is the conclusion of what was a successful Newman Numismatic Portal Symposium 2020. The symposium, held online using Zoom, had several interesting speakers and presentations. Although NNP has yet to publish its final statistics, the sessions I attended were well done and seemed to be well attended.

My session, “How to Identify a Potential Scammer BEFORE Buying Coins Online,” was attended by more than 60 people and generated about a dozen questions. It was a great experience.

I will have more to say about the NNP Symposium in the next few days.

Two Israeli teenagers on summer break unearthed a trove of hundreds of gold coins that date from 1,100 years ago.

→ Read more at edition.cnn.com
How To Tell If Silver Is Real

Are you looking for ways to tell if your silver is authentic?—the “real McCoy”? There are several ways you can determine whether your silver is real. In fact, some of the best silver test methods are quite easy and can be done right at home.

→ Read more at gainesvillecoins.com
For Sale: One of the First and Most Valuable Dollars in U.S. History

→ Read more at atlasobscura.com
"Find of the Century": Trove of silver coins dating back to Kievan Rus found in Ukraine (Photo)

→ Read more at unian.info
Why do humans turn to gold in times of crisis? It's just metal

Somebody stole a very pricey potty last year from the restroom of a palace in England. But the police still don’t know who did it and have been trying to find out ever since.  “The toilet is still missing,” a Thames Valley Police spokesman confirmed to USA TODAY Aug.