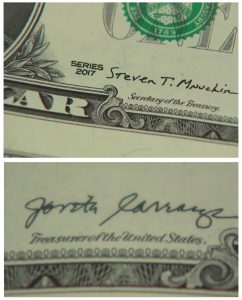 The transition team has not announced who will be the next Treasurer of the United States. Currently, the position has been vacant since January 2020. Jovita Carranza, the previous Treasurer, was appointed as Administrator of the Small Business Administration.

Just think, if Biden appoints a woman as Treasurer, there will be two women’s signatures on the Federal Reserve Notes.

Although there is no rule as to when the Bureau of Engraving and Printing changes the series of U.S. currency, recent history suggests that Yellen’s signature will first appear on Series 2021 notes. Even though the Bureau of Engraving and Printing will print billions of dollars in Federal Reserve Notes, it might be worth finding crisp notes with fancy serial numbers to put away for a while.

Recovering from a stroke, a businessman rekindles his childhood passion for coins and stamps and builds up a multi-million-dollar collection now on display in a tiny museum in Dubai

A hoard of 47 silver Roman coins and British Iron Age gold coins have been donated to a museum after being declared treasure.

News LAPEL, Ind. — A man who lost his decades-old coin collection after shipping it to his son wants to warn other people to be careful mailing valuables this holiday season.