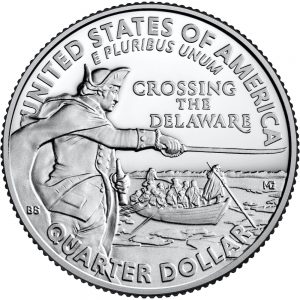 The Federal Reserve Banks have not commented on the problem, but the U.S. Coin Task Force continues their Get Coins Moving promotion. When speaking on background, sources say that there are coins in the Fed’s cash rooms but that the amount they keep in reserve for emergencies is lower than usual. Some report that there is an overabundance of dollar coins if someone wants them.

While other areas of the country are experiencing coin shortages, the D.C. area does not seem to have problems. The only advertising for the Get Coins Moving program is on national telecasts. Very few businesses have signs asking for customers to spend their coins.

Even though the U.S. Mint produced more coins than it had in its history in 2020, the change I receive is full of 2019 coins and older 50 State Quarters. Over the weekend, my change had six Ohio state quarters complete with the hanging astronaut.

We are getting close to the end of July, and I have not seen a 2021 coin, including the Washington Crossing the Delaware quarter.

There is money out there. People have to spend it for it to circulate. Please spend your pocket change so I can find something interesting.

The SA Mint made less money from making money last year, but still made lots of money

Despite disruptions brought on by the pandemic, the SA Mint managed to produce the Reserve Bank's full order of 811 million coins in its 2020/21 financial year.

An extremely rare 22-carat gold coin dating from the reign of Henry VIII has sold for £64,000.

The silver market faces some short-term headwinds as focus on the potential for tighter monetary policy; however, the precious metal's drop to a three-month low below $25 an ounce has exaggerated the market's weakness, according to one research firm.

→ Read more at kitco.com
Could coins found in Polish field come from Viking siege of Paris?

Historians are wondering how 118 coins minted during the Carolingian Empire, a Frankish dynasty who ruled over what is today much of France, Germany and Italy in the period 750–887 AD, managed to find their way to Poland.

→ Read more at thefirstnews.com
Ancient coin repatriated to Greece by US authorities

An unprovenanced ancient coin, identified as a Stater (c. 500-480 B.C.), was handed over to the Greek Ambassador to the US, Alexandra Papadopoulou, on Thursday, by officers of the US Immigration and Customs Enforcement.

Archaeologists from the Institute of Archaeology of the Russian Academy of Sciences have announced the discovery of a coin hoard in the ancient city of Phanagoria. Phanagoria was founded by Teian colonists around 543 BC, and developed into a Greek centre of trade between the coast of the Maeotian, and the countries on the southern side of the Caucasus.