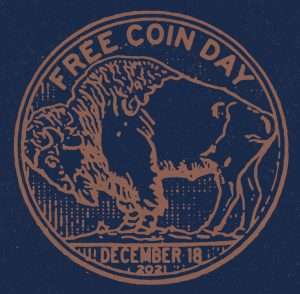 After a bit of a hiatus, the Coin Week podcast resumed with a discussion of Free Coin Day. Free Coin Day encourages dealers to give away one coin to every customer to celebrate coin collecting.

Free Coin Day was founded by Coin Week’s editor Charles Morgan and joined this year by Rob Oberth of Round Table Trading. Both are members of the ANA Board of Governors. They encourage those participating in Free Coin Day to use the hashtag #FreeCoinDay to help promote the venture.

While Free Coin Day is a good idea, it is preaching to the converted in many ways. It requires someone to be motivated to walk into a coin shop to participate. Unfortunately, there are fewer brick-and-mortar shops, and most dealers are either working shows only or selling online, and access to dealers is limited.

While Oberth and Morgan have the beginning of a good idea but it does not go far enough. New collectors want experiences, and their collections represent something about their experiences.

Other collecting industries learned this the hard way. During the market downturn of 2008, most industries retrenched and figured out a way to revive old hobbies. The comics industry was not as vibrant. The idea of changing the industry beyond the paper book was not something the publishers wanted to do because it was the lifeblood of the industry.

The publishers realized that paper-based products were on their way out. The industry diversified with ancillary products, including movies, modern stories, collectibles, and experiences. One of the attempts to expand their reach was to embrace the existing ComicCons. The publishers poured more money into the ComicCons and used the larger Cons to launch products.

During the podcast, Oberth and Morgan all but dismiss the ideas learned from the comics industry. Rather than trying to figure out a way to make coin collecting an experience, they are giving away low-end coins trying to entice distracted Millenials and GenXers into coin shops.

Found in a Candy Tin: One of the First Coins Struck in Colonial North America

The simple coin design was quickly replaced, leaving only 40 or so surviving specimens today. Courtesy of Morton and Eden

THE 1955 Lincoln obverse cent is one of the most unique coins in existence and you're very lucky if you happen to have one in your possession. Since 1909, the US Mint has struck cents that feature 16th US President Abraham Lincoln.