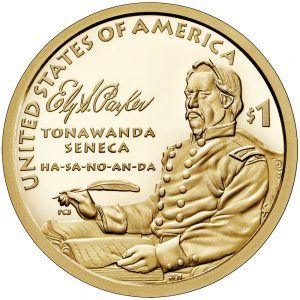 This past week, I had an email conversation with a reader and collector from the United Kingdom that started with a conversation about the Women on Quarters and Innovative Dollar programs. In one of the emails, I was asked why the dollar coin was not generating interest.

The simple answer is that the dollar coin does not circulate.

My correspondent asked why the United States strikes a circulating coin that does not circulate? My response, “because it is the law, ” did not satisfy my correspondent because the U.S. also prints a paper dollar. Why do both?

Good question. Why does the United States do both?

There are several reasons, but the main driver is politics. For many years, Ted Kennedy, the powerful senator from Massachusetts, protected the interest of Crane and Company, the manufacturer of U.S. currency paper. On the other side, politicians interested in manipulating people against the government convinced them taking the paper dollar away would weigh them down.

In response, my friend from across the pond said it did not make sense while pointing out that many countries successfully dropped paper for coinage.

The arguments become a religious war whenever the paper versus coin discussion surfaces. I had no answers as to why. Some day, we may resolve this debate, but it is not going to happen today.

Secretary Janet Yellen reiterated the promise of ensuring an inclusive currency in an internal department Black History Month message. In contrast with the several speculations spreading over the internet, the Harriet Tubman $20 bill is on its way to rolling out in 2030.

The historic rocket that launched the first astronauts to the moon will blast off from the back of a new dollar coin in 2024.