As gold falls so will U.S. Mint prices

If you have not seen what has been going on in the gold market, the prices have been falling. The financial press has not provided a single reason as to why the gold market is going down but there is a consistent view that the United States economy showing strength with unemployment dropping and low inflation may be alleviating fears in the markets. Stocks are rising and it is suspected that investors are selling their gold shares in order to participate in the bull market.

For collectors it means that the U.S. Mint could adjust the prices of precious metal products. In particular, the price is coming down that could affect the price of the Kennedy gold half-dollar. Based on the table published in the Federal Register [PDF], if the London Fix price of gold falls below $1,250 per troy ounce, the price of the coin will drop to $1,202.50 or $37.50 below the $1,240 issue price.

The London Fix is now managed by The London Bullion Market Association. Gold prices are set by an auction that takes place twice daily by the London Gold Fixing Company at 10:30 AM and 3:00 PM London time. Auctions are conducted in U.S. dollars. The benchmark used by the U.S. Mint is the PM Fix price on Wednesday. 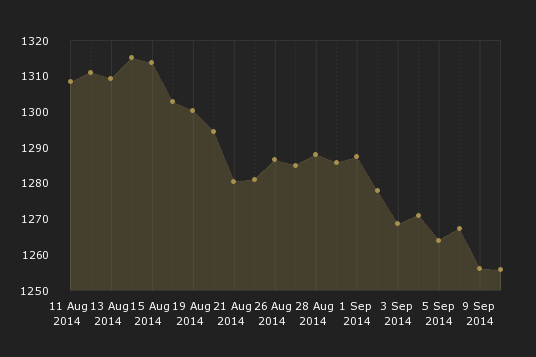 A strong economy is good for many reasons. In this case, when the price of gold drops the price of gold coins also drops. While this is not good for investors, it benefits collectors who will buy one or two coins for their collections. It also means that the value of the inventory that the dealers who spent a lot of money and effort in order to be first will be worth less than previously. After all, if the U.S. Mint is going to produce as many coins as the demand, then the public is better off saving money and buy from the U.S. Mint.

As anyone who has invested money will tell you that it is dangerous to try to time the market. I am sure that if you can figure out when the price of gold will be at its lowest while the U.S. Mint is still selling the Kennedy gold half-dollar, I know a bunch of people on Wall Street who want to talk with you. That being said, I have a feeling that the trends are in favor of waiting to see what happens. Although I have not decided whether I will buy a coin, I am going to wait to see what the market does. If the price of gold continues to fall, I could be convinced to buy one of these coins for myself.