What do you think it’s worth? 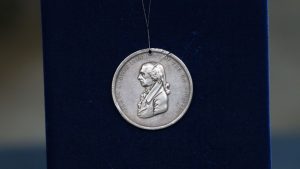 Finding coins in pocket change can be a lot of fun. Then there are those who find hoards of coins buried in the ground or just stored somewhere that people forgot. From shipwrecks to treasure hunts, we all dream of finding the next jackpot somewhere.

On your great grandfather’s farm, a worker was plowing the field and found a silver medal. It has the image of President James Madison on one side and what looks like a peace medal on the other. Rather than letting go, great grandpa traded three hogs for the medal.

The medal gets handed down from generation to generation until one of his ancestors takes the medal to Antiques Roadshow to find out what it is worth.

You are told that it is a silver James Madison Indian Peace Medal. The 1809 medal was designed by assistant engraver John Reich and struck at the U.S. Mint in Philadelphia. It is not the largest of the medals but at 2½-inches, it is a fairly significant medal.

What is it worth? See what Jason Preston of Jason Preston Art Advisory & Appraisals of Los Angeles said about the medal on Antiques Roadshow:

Did you guess right?

Image and video courtesy of WGBH and the Antiques Roadshow