X your own spot

We do not follow maps to buried treasures and X never ever marks the spot.

Professor Indiana Jones could have been talking to coin collectors in 2014 instead of his 1940s-era archaeology class at the mythical Marshall College in “Indiana Jones and the Last Crusade.”

Those watching the coin-related news on both sides of the Atlantic Ocean (“the pond”) may have noticed that finding buried treasure appears to be a consistent theme. Even though some dealers and grading services have complained about the lack of fresh inventory to excite collectors, could new era of coin collecting be fueled by treasure hunters?

This week, Stack’s-Bowers announced they have been searching through a hoard they call the West 57th Street Collection. Stack’s has reported that the 30-ton hoard could be worth $15-20 million and includes coins of all types including nearly 10,000 1909 VDB Lincoln cents. Coins will be sold by Stack’s-Bowers via their online auctions with the rarities being sold at their larger events like the auction at the Whitman Baltimore Expo and American Numismatic Association World’s Fair of Money.

Two weeks ago, Kagin’s made public the finding of the Saddle Ridge Hoard, a hoard of 1,427 gold coins found in cans buried under a tree somewhere in California. Although the names of the finders of the coins is being kept secret, it was reported that the tin cans filled with 19th century gold coins were found by a couple walking their dog.

A man from Victoria Island, British Columbia found an English shilling from around 1551 using a metal detector. It is the oldest coin found on the west coast of Canada. Local experts theorize that the coin was brought to the area by Sir Francis Drake who was sent on a secret exploring mission in 1557. Allegedly, Drake gave the coins to the native peoples as proof the English laid claim to the land. The man who discovered the coin is recently retired who took up metal detecting hunting as a new hobby.

Another metal detector enthusiast in found a 1700-year-old Roman gold coin in Wiltshire, England. The coin was struck for Emperor Licinius I in AD 313 and struck in Trier in Germany, the site of the main mint of the western Roman Empire. The coin was to be sold at auction in December somewhere in London and estimated to bring £30,000 (approximately $48,000). Unfortunately, there have been no follow-up news reports regarding the sale of this coin.

In June 2013, it was revealed that a man found 159 gold coins 20 minutes into his first ever outing with a metal detector. The hoard was found in a field near St. Albans in Hertfordshire, England buried about 7-inches below the surface in October 2012. Publicity for the hoard came on the day a formal inquest was held to determine the ownership of the coins as required by British law. Inquests are publicly announced so that claims may be made. Anyone who can prove a legal claim to the hoard may challenge the ownership. As with most cases of ancient coin finds, only the press comes to gawk at the new found fortune.

What makes this a remarkable story is that the man who found the coins was 20-mintues into his first metal detector hunt. Not sure he wanted to take up metal detecting as a hobby, the man purchased a low-end model recommended for people exploring the hobby or families doing casual metal detecting. For this man, it paid off when he found an ancient Roman solidus estimated to be about 1,600 years old just 7-inches below the surface. The hoard is estimated to be worth £100,000 (approx. $156,000).

With the exception of the West 57th Street Hoard, the other treasures were accidental finds. Whether you are a couple out walking your dog or taking your metal detector out for the first time, it appears that buried treasure still exists.

This does not even account for the finding of sunken treasure like the $77 million of silver found Odyssey Marine discovered at the bottom of the Atlantic Ocean in July 2013. The silver was found on what is supposed to the British steamship SS Gairsoppa, a ship that was sunk by a torpedo from a German U-boat while transporting the silver from England to India in 1941. As with most large finds, this discovery is tied up in court proceedings.

Does this mean that there are no treasures for others to find? That is difficult to say because we do not have maps and, with the exception of the movies, X does not mark the spot.

If you want to try to find a treasure, you need to consider what the world was like in years past and not today. Was the area you are searching once a forest that was not inhabited or was the area that is a park or forest today once a village, town, or small city? Is there a trail that was one a well-travelled trade road or could that trade route be buried under your neighborhood?

A friend who goes out regularly with a metal detector says that most of the finds are not made by dumb luck. Successful metal detector hobbyists take the time to research the areas which they are interested to understand what was once in that location. Before going on a search, they will go to libraries or town halls to look at past records. This gives an insight into what was once in the area they want to search so that they can concentrate their limited time to get the best reward.

Although we are interested in finding coins, metal detectors will find anything metallic including old tools, pottery that was glazed with metal-based enamel, weapons, spent bullets, armament, and anything else made of metal. The friend mentioned above found a lost town in the Midwest. It appears to have been the proverbial waterhole along the railroad, a stop along the tracks for the steam engines to refill their water tanks. The town died after diesel locomotives made the need for a water stop unnecessary. They did find coins but many were unremarkable or common for the period but kept with the town that has been turned into a tourist attraction.

If you decide to do some treasure hunting and find something, let me know. I would love to bring the story to the community. 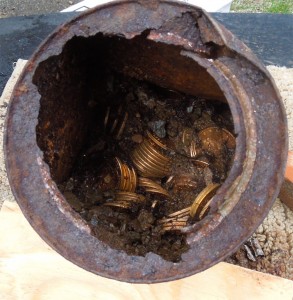 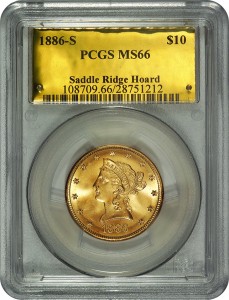 One of the 1,427 “Saddle Ridge Hoard” buried treasure gold coins certified by PCGS. 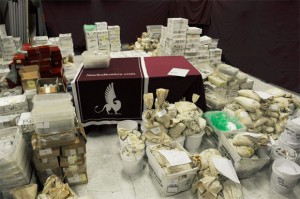