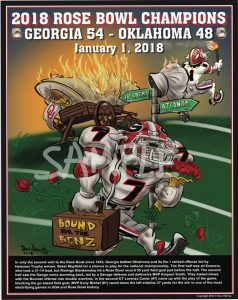 This is the space where I try to comment on something in the news that I found interesting. Like my update on December 3, 2017, my mind is elsewhere.

If you are a college football fan or happened to watch the Rose Bowl last Monday, my undergraduate alma mater, the Georgia Bulldogs played a thrilling game to beat the Oklahoma Sooners 54-48 in double overtime for the right to play in the National Championship game tomorrow. The last time Georgia played in the Rose Bowl, they were crowned the 1942 National Champions.

Seventy-five years later and 37 years after Georgia’s last National Championship (in the 1981 sUGAr Bowl where I was a member of the Redcoat Marching Band), it will be a battle of Southeastern Conference Titans: Alabama v. Georgia. Also known as the Teacher v. the Student since Georgia Head Coach Kirby Smart was once the Defensive Coordinator and Assistant Head Coach under Alabama’s Nick Saban. Saban’s former assistants are 0-11 against their former boss. At some point, that streak has to end. Why not on Monday?!

Of course, my mood has been affected by Monday’s game. Even while working an antique’s show this weekend, which is why I am not in Tampa for the Florida United Numismatists (FUN) Show, it has been a wild week—and sales have been very good. But I am waiting for the game. Monday night at 8:00 PM on ESPN.

For the coin toss (I have to include some sort of numismatic content), the referees used a silver coin with the logos of the schools on both sides. The coin looked like it was silver dollar size (at least 38mm) and in an AirTite or similar holder. There was no calling “heads or tails.” The logo that showed face up won the toss. For the pre-game and overtime coin tosses, Oklahoma won the toss. But that does not matter. I want one of those coins!

Both the Rose Bowl site and the Highland Mint has what they call “dueling helmets” coins (yes, I know they are really medals). I want one of those silver coins like that was used for the coin toss. I sent a note to the people who run the Rose Bowl to ask how I can purchase one.

If you want to know what kind of mood I will be in on Tuesday, it will correspond to the outcome of the game!

The story of Dr Frankenstein and his cursed monster is celebrated in a new set of coins. A £2 issue will mark the 200-year anniversary of the novel by Mary Shelley which launched the modern horror genre.

Editor's Note: View Kitco News' full 2018 outlook coverage (Kitco News) – It was a tale of two markets for gold in 2017, as prices made their biggest gains since 2010, but U.S. Mint coin sales were the weakest in a decade.

Pope said "no thanks" to Norwegian coins

Norway minted its own coins during much of the Middle Ages. But the coins didn’t always impress outsiders or even the Norwegians themselves. NTNU Associate Professor Jon Anders Risvaag specializes in medieval coins.

This is how the military challenge coin came to be

Challenge coins mean different things to different troops. Senior enlisted and officers tend to place them on a desk to gloat to peers and the more junior troops slam them on the bar to see who’s buying the next round.

Royal Mint's commemorative coins for 2018: will they make good investments?

The Royal Mint has unveiled the designs of four new commemorative coins to be launched this year. Based on the sales values of previous issues, these could be attractive investments. Three of the coins commemorate the centenaries of major events and organisations that have helped shape Britain, including a £2 coin that marks the 100th anniversary of the First World War Armistice — the agreement that ended fighting between the Allies and Germany.