Keeping with this week’s theme of sports on coins, a company named Baseball Treasure (at baseballtreasure.com) created baseball “coins,” technically medals, representative of all 30 teams. Each team is represented by one player whose likeness will appear on the medals.

According to their website, one in every 432 packs will have a version of the medal made in .999 silver. Silver medals have been struck for each of the 30 players.

If you want to go for the gold, one in every 21,600 packs contains a specially marked medal redeemable for a gold medal featuring Aaron Judge of the New York Yankees. This was created to commemorate his rookie record of 52 home in the 2017 season. 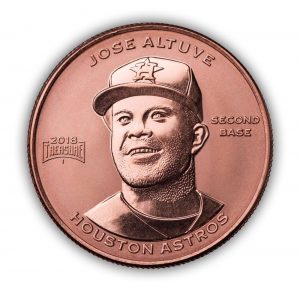 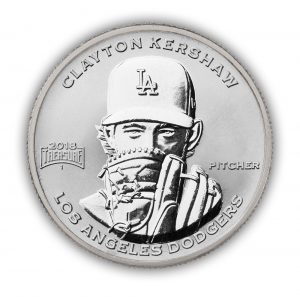 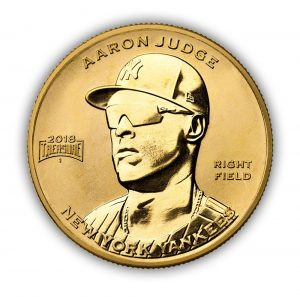 For those who are into trivia and would like to win a silver medal, they will post a clue on social media with the answer being a major league team. If you want more information, visit their #JoinTheHunt webpage for more information.

Previously, Upper Deck created hockey coins that they sold for $100 per coin on a virtual basis. While you could request the physical coin, they created a system to buy and trade these medals. There was also the chase to find the gold versions in this series.

The hockey coins are legal tender coins in the Cook Islands.

I had interviewed the Vice President involved in the program and just could not bring myself to write about the interview because I was very skeptical about how the program worked. Initially, they were sold in what they called e-Packs, virtual packages that would be held by Upper Deck. From the e-pack website, collectors can trade with each other.

One of my issues with this program is that they are sold blind packaged like baseball cards. You do not know what is in the package until it is opened. At $100 you can receive either a one-ounce silver coin, one-ounce high relief coin, one-ounce silver frosted coin, or a quarter-ounce gold coins. It would be a real bargain if you received a gold. It would be a worse deal than many Royal Canadian Mint silver coins otherwise.

Visiting their website recently, there is an option to purchase the coins at Canadian Imperial Bank of Commerce (CIBC) throughout Canada. There is no option to physically purchase coins in the United States except through the e-pack website.

These coins must be selling well enough for Upper Deck to continue the program.

In both cases, I am just not impressed with either program.

Both programs are over-priced.

The Baseball Treasure program is selling one-ounce of copper medals at $6.65 each. With the current copper price of $3.2858 per pound, each coin contains 20.5-cents of metals. The rest is packaging, licensing, and distribution. Even so, that is a 3,123,9-percent markup that you may never make up on the secondary market if you were to lose interest, especially since this is a medal and not a legal tender coin.

Of course, it is a better deal if you found a silver or gold medal. Then again, part of the markup to the copper medal is subsidizing the silver and gold medals. Without knowing how many medals or packages are being produced, it is difficult to determine how much of the $6.65 price is subsidizing the gold and silver.

Baseball Treasure’s program is certainly a more interesting idea than the Upper Deck Hockey Coin Program. It is more affordable and carries less risk. The Treasure Hunt also looks like fun and maybe something I will look into. But for now, it is not something I will collect. But if you do be aware that the copper medals may not return much more than $1-2 on the secondary market, depending on the price of copper.