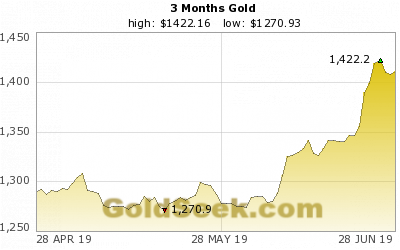 Price of Gold for the 2nd Quarter of 2019
(Chart courtesy of GoldSeek.com)

News of the week is not happening on the pages of the non-numismatic media but in the precious metals market. Specifically, the rise in the price of gold. While this news makes the gold bugs happy, it is a bad indicator for the rest of us.

Gold is considered a safe bet for investors. It is a way of investing in cash or cash equivalence. Investors buying gold will purchase bullion, gold bullion coins like the American Eagle, or shares in a fund that maintains large stores of gold. There are many types of funds and ways to purchase shares in these funds, but it is not the same as owning the physical gold. Most reports are claiming that investors are interested in purchasing physical gold with bullion coins being the preference.

Investors make money by investing with what they consider a manageable amount of risk. If the risk pays off, they can make a lot of money. The risks that fail must be made up elsewhere. Investors diversify their portfolios to mitigate these risks. However, if the institutional and large investors are moving their monies to safe harbors, like gold, they sense a problem.

This relatively sharp jump in the price of gold is being driven by the major investors who are worried about the future of the U.S. economy. They see the various trade wars being detrimental to the economy. One economist said that the recent hike in soybean tariffs to China is going to have long term effects long after this president leaves office.

Although the United States is no longer an agrarian economy, agriculture plays a significant role in the country’s economic health. Upsetting that role that agriculture plays will cause long-term damage to the economy. The soybean tariffs are believed to be the driver that is scaring investors.

You may ask how are soybeans causing gold to rise?

As part of foreign policy in Africa, the government has been supplying countries with the proper climate the means to grow soybeans. It was a way to make the countries self-sufficient by helping create an economy. In many cases, the United States did not follow through on commitments to help with the infrastructure that is needed to create access to the markets. Countries needed irrigation and road improvements. Rather than helping with the upgrades, the United States government concentrated on the military aspects of these country’s problems. A policy of one-problem-at-a-time.

For at least 15 years, China has ignored the military issues and began to supply the money, supplies, and labor to fix the infrastructure. The Chinese government helped build irrigation systems, roads, and provided transportation to build these economies with the promise that China would buy their products.

Although there was significant Chinese investment in Africa, it was still cheaper to buy soybeans from the United States. That situation changed with the 25-percent tariffs placed on soybean exports. The tariffs raised the price of U.S. soybeans beyond what the Chinese would pay to the African exporters. Now China is importing soybeans from Africa while U.S. farmers are provided allegedly short-term subsidies from the federal government.

Now that the infrastructure is in place for China to import soybeans from Africa, the costs have reduced and is projected to have the long-term effect of lowering the U.S. market for soybeans in China. One economist said privately that even if the tariffs were reduced to pre-trade war levels, it might not make it economically viable for China to buy as much from the United States as it did in the past.

Institutional investors see the loss in revenue from China, the increased deficit in providing welfare to soybean farmers, and the danger of the business not returning to the United States. They also see the reduction of tariffs to Russia for wheat and that Russia is also looking to African and South American countries for wheat sources. The competition is making trade prices drop and is making it look like agriculture trade is in trouble.

If exports of United States agriculture are in trouble, then it will hurt the economy. With the uncertainty added to the risk profile investors and fund managers have to manage, they have turned to gold as the natural, safe harbor.

The rise in gold prices always helps numismatics. It helps boost the prices of gold and, by association, other rare coins. However, if the gold prices go up because of economic stress, it will not matter what happens to numismatic prices. Fewer people will be in the market to buy coins.

How to get started with gold-coin investing

Gold is a hedge against financial risk, and coins offer convenience.

COIN collectors can now get their hands on a Toy Story 4 50p piece – but you can’t use it in shops. The commemorative coin features popular character Woody in colour with the cowboyR…