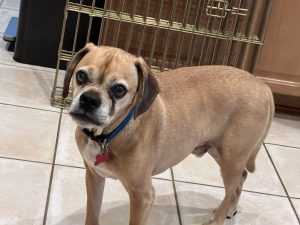 When my wife and I left today, we came home with a new family member. We welcomed Abe to our family four months after Tessa crossed the Rainbow Bridge.

Rescuers found Abe Pugoda as a stray. The rescue organization said he was well behaved with many of the typical medical problems strays experience, and it appears that someone might have abandoned him.

One look at that face made it difficult to understand why someone would abandon Abe. He has a good disposition, moderate energy, and a sniffer that doesn’t stop. Abe is a Puggle, half pug, and half beagle. Doctors that examined him believe that he is 10 years old.

Abe has had an eventful first day in his new home. We know it will take time for us to become accustomed to each other. For us, we have another four-legged baby in the house and looking forward to having fun over the next few years together.

Treasures from legendary 1857 "Ship of Gold" shipwreck unveiled in Nevada

A mysterious daguerreotype of a woman and a pair of jeans possibly made by Levi Strauss himself are among nearly 1,000 Gold Rush-era treasures recovered from the fabled "Ship of Gold" now on display in Reno, Nevada.

→ Read more at cbsnews.com
Why will Banxico disappear the new 20-peso bills? – California18

The new 20 peso bill presented in September 2021 to commemorate the bicentennial of the Consummation of Independence, will stop circulating by 2025, as reported by the Bank of Mexico (Banxico).

→ Read more at california18.com
Archeologists Discover Zodiac Coin with a Cancer Sign in the Mediterranean Sea

Investigators as well as experts who have been fishing off the coast of Israel unearthed a bronze penny on arguably one of the Roman Civilization's finest tranquil periods.

The archeologist team in North Israel has found a bronze coin that depicts the zodiac symbol. It dates back about 2,000 years. The archeologists have discovered it near Haifa.

→ Read more at art-insider.com
A Viking's penny pendant is found near King's Lynn

A St Edmund memorial penny worn by a Viking to "advertise his Christianity" has been found by a metal detectorist.