Twain Would Be Amused 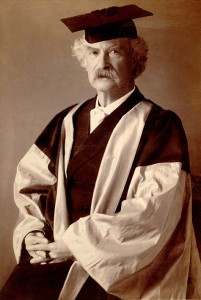 Mark Twain in his gown (scarlet with grey sleeves and facings) for his D.Litt. degree, awarded to him by Oxford University

Under suspension of the rules, the House of Representatives voted 408-4 to pass H.R. 2453, Mark Twain Commemorative Coin Act. The bill has been officially enrolled and sent to the president for his signature.

When the bill becomes law, the Twain commemorative will be in 2016 to sell 100,000 $5 gold coins and 350,000 silver dollars whose designs “shall be emblematic of the life and legacy of Mark Twain.” There will be the usual $35 surcharge for the gold coin and $10 for the silver dollar that will be distributed evenly to:

After looking at the list, I could not imagine why Elmira College is on the list until I discovered the Center for Mark Twain Studies. Twain was married in February 1870 to the former Olivia Langdon in Elmira. While Twain and his family lived in Hartford, Connecticut, he summered at Quarry Farm in Elmira, the hole of Susan Crane, Olivia’s sister.

Twain would be amused by the commemorative. While he had a love for science and technology, Twain did not embrace his celebrity as much as some do today. Even after he faced financial troubles from bad investments and the depression from the death of his daughter Susy of meningitis, friends pushed Twain to the lecture circuit. His lectures were humorous bordering on an early form of stand-up comedy full of self-deprecating humor. Part of his talks marveled how people would pay to hear his speak or seek him out for advice.

Twain always marveled at the concept of celebrity for the sake of being famous. He thought that the great thinkers and inventors should have been more revered. Twain befriended Nikola Tesla understanding that Tesla was a far greater innovator that people gave him credit for. At the same time, he become friends with Henry Huttleston Rogers, a principal of Standard Oil, who largely stayed out of the limelight while company founder John D. Rockefeller remained the face of the corporation.

Mark Twain, or Samuel Longhorne Clemens as he was born, was an interesting character in United States culture. It would be interesting to see if the design of his commemorative would honor his humor and character or go the safe route by honoring his writing. Using Tom Sawyer and Huckleberry Finn as themes would be safe designs. Basing a design on his humor would be more daring and fun.