Baseball gold is called out 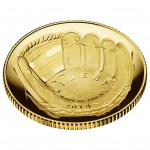 The U.S. Mint reports that the $5 gold National Baseball Hall of Fame Commemorative Coin has sold out. It may be the fastest sell out of any gold commemorative coin in the modern commemorative era lasting only through the first weekend.

It has been speculated that the U.S. Mint will strike more coins than the law (Public Law 108–291 [PDF]) allows on order from the Secretary of the Treasury. No official decision has been announced by either the U.S. Mint or the Department of the Treasury. However, it is questioned whether it is legal for the Secretary to make this decision unilaterally or requires an act of congress. There seems to be evidence that someone had previously approved an increase for the 2005 Marine Corps Commemorative dollar, but there is no authoritative source for proof.

Collectors who have contacted me are not happy with the U.S. Mint. Many believe that the high limit (50 coins per “household”) was too high. When I posted images of the graded baseball coins, several commented that they felt that dealers “abused” their access to the immediate supply of coins that were available in the U.S. Mint booth at the Whitman Baltimore Expo that many collectors did not have a fair chance.

None of my correspondents would bemoan a dealer’s ability to make money on the secondary market. But to do so by taking advantage of the U.S. Mint’s inability to manage its market as the lone producer of U.S. commemorative coins was considered excessive by many. Although I sympathized with their point of view since I could not purchase one for my collection, I questioned whether the U.S. Mint has an obligation to just sell the coins or satisfy market forces. But as many pointed out, the U.S. Mint is a government agency and has a responsibility to the people of the United States and not just the corporations.

While at the Whitman show I spoke with one of the U.S. Mint employees who said that they should have limited the number of coins someone can purchase at one time. Although they did enforce lower limits on the supply of coins sold on Saturday, the damage had been done leaving collectors to scramble to buy the coins on the secondary market or order them online. Those of us who order the coins from the U.S. Mint online catalog will have to wait until June 21, according to the notice sent to me. However, the website is saying that the proof dollar is backordered until July 7 while the clad proof half-dollar is will be available on April 10.

Like many of my correspondents, it is difficult to believe that anyone at the U.S. Mint would be afraid that this commemorative would not sell. A simple search using your favorite search engine would have shown that the coverage of the striking of the first curved coin in U.S. Mint history was seen world wide. Even the image of Cassie McFarland, the artist whose design was selected for the obverse of the coin, holding one of the first strikes in her gloved hand was reproduced on news outlets throughout the world. You cannot buy that kind of publicity.

We are talking about baseball, America’s pastime. America’s game. Regardless of the accepted story of its founding, it is generally accepted that Major League Baseball was founded in 1869 making it the oldest organized league in North America. Not only was the coin released just before Opening Day for 2014, but the National Baseball Hall of Fame and Major League Baseball have been promoting this coin since the bill was signed.

To even hint that this was going to be a situation like the failure of the 2013 Girl Scout Commemorative would be very short sighted and foolish.

Maybe the U.S. Mint should review its sales processes than chase after pattern coins.

In the mean time, the U.S. Mint published a B-Roll for the National Baseball Hall of Fame Commemorative.