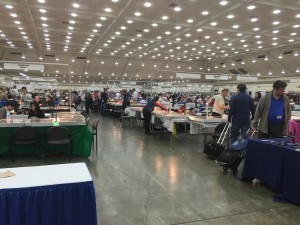 As it does three times per year, Whitman rolls into the Baltimore Convention Center for the Whitman Baltimore Expo. This time, rather than the showing being in Halls A and B it was held in E and F. The new location within the building was not as intuitive to find as walking to the end and Whitman did not do as good of a job as they could have in placing their signs. But for general access, which is was off of South Sharp Street, it provided a little better access than off of West Pratt Street, which is a main artery as it passes in front of the Inner Harbor.

Although there were the same number of booths, the space felt smaller. Lights were brighter since these halls seem to have been converted to using LED lighting—the brighter space made the convention center seem less cavernous. Aisles were not as wide and some of the layout changed, but it seemed to have the same number of dealers. Some of the dealers who had larger spaces did downsize and the one vendor of supplies that is not Whitman did not set up at the show. It is not known if they decided not to attend or were not invited to attend. Since Whitman does not carry all books and supplies, it would be nice if they had another supplier.

On thing I have noticed is that since the death of numismatic book dealer John Burns in early 2014 there seems to be fewer numismatic book offerings at some of the east coast shows. Aside from missing his sharp wit, I was always able to find something a little off-beat or out of the ordinary amongst the books he had for sale. While there was a book dealer at this show, the items were more toward what I would consider ordinary. I hope someone steps in with some interesting items.

As I walked the floor and spoke to many of the dealers (late Friday afternoon), they all said that they were doing well. With the area still a bit chilly and no sports to take over the downtown Baltimore area (home opener for the Baltimore Orioles is on Friday, April 10), visitors to downtown Baltimore had plenty of time to visit. For those of us who like access to a major coin show, it is good to hear. If the dealers are doing well then they will keep coming back. If the dealers come back, the show goes on.

Both the U.S. Mint and Bureau of Engraving and Printing had booths at the show. While the U.S. Mint was showing current products, the Bureau of Engraving and Printing had some historical information. Although it is good to see the U.S. Mint at the show, it might be nice to see some historical artifacts. Since most of the U.S. Mint’s collection was given to the Smithsonian Institute, maybe they can be convinced to bring an exhibit to the show. Having the Smithsonian there would be very different than other shows since they have a different type of collection than the American Numismatic Association, for example. 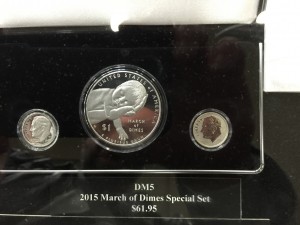 2015 March of Dimes Commemorative Proof set will cost $61.95 when released

The U.S. Mint was showing off the March of Dimes Commemorative set that will go on sale later this year. The set features a proof 2015 March of Dimes Commemorative dollar, a proof Roosevelt dime from San Francisco, and a reverse proof Roosevelt time from Philadelphia. The reverse proof dime is beautiful. It seems that the reverse proofs are really attractive coins. Seeing this set only enforces my desire to buy it when it becomes available.

Another interesting find was the First Edition of the Red Book Deluxe Edition. While flipping through it at the show, it looks like the Red Book on steroids. There is more information, more detail on pricing, and some other features. A first impression is that it extends the Red Book franchise a bit beyond what they called their Professional Edition. While there is a lot of information, my first impression is that I wish it was more of a cross between the Professional Edition and the Coin World Almanac. Both books have their places, but to combine the pricing and information that is updated yearly (the Coin World Almanac is updated every 10 years) would be a great resource. Hopefully, I will get my hands on one to review.

Finally, no show would be complete with out my one cool find. After walking the floor for a few hours I finally stat at the table of Cunningham Exonumia and had a nice chat with Paul Cunningham while searching for something New York. While I have not given up coins or Maryland Colonial Currency, I seem to be having more fun trying to find tokens and other exonumia from New York City and my hometown of Brooklyn. I have seen Paul at many other shows and have purchased from him. He always has a great selection. For me, I may have exhausted some of his inventory. This time, the pieces he was offering this weekend I already have in my collection.

But it did not stop me from looking. Tokens are very interesting. They are alternatives to money and are more tied to the culture of the community than money. For me, a New York Subway token not only represented a ride on the subway, but it also represents a different part of my life. It makes collecting very person. Although I have a collection of subway tokens I continue to look because you never know what you can find—especially an error.

What I found was a large token with an error. It was sold as the “Large Y” token where the “Y” was supposed to be cutout. Those tokens were used from 1970-1978 and two fare increases starting out at 30-cents in 1970, 35-cents in 1972, then 50-cents in 1975. But what I found is not that token. After examine the token carefully and some others I have, this is an error to the “Solid Brass NYC” Token. Introduced with the 60-cent fare in 1980, the “Y” was part of the raised design and not cutout. The clue as came when examine the obverse (the side that says “New York City Transit Authroity”). Between the “N” and the “C” is the tail of the “Y” but without its top. That tail would not have existed on the earlier tokens because they would have been cut out. Instead, the is a die issue where only the tail of the “Y” on one side was struck. 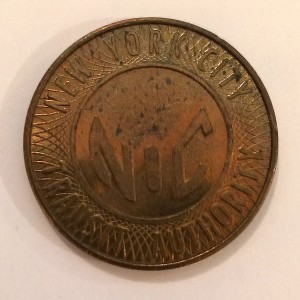 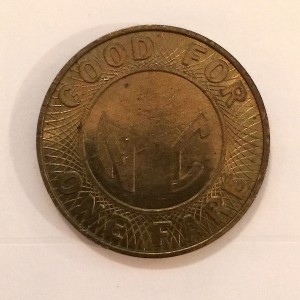 It might not be the error I expected, but it is an error nonetheless! It also does not make it any less fun or valuable because it will fit nicely in my collection.

If you were not able to make it Baltimore, here are some of the pictures I had taken at the show: